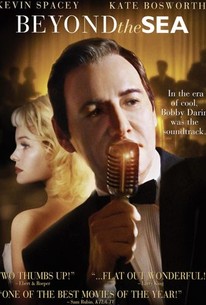 Critics Consensus: Kevin Spacey's bio of singer Bobby Darin is either a fearless piece of showmanship or an embarrassing vanity project, according to critics.

Critics Consensus: Kevin Spacey's bio of singer Bobby Darin is either a fearless piece of showmanship or an embarrassing vanity project, according to critics.

Critic Consensus: Kevin Spacey's bio of singer Bobby Darin is either a fearless piece of showmanship or an embarrassing vanity project, according to critics.

Beyond the Sea Photos

For Bobby Darin, performing was his life. It kept his heart beating. He came alive onstage, even when he was near collapse offstage. From the age of seven, Walden Robert Cassotto--Little Bobby knows the odds are stacked against him. Rheumatic fever has permanently damaged his heart, and he's not expected to make it to age fifteen. Bobby's family pours all their energies into caring for him. Bobby's frail heart may be one truth, but his mother Polly, a former singer, introduces her boy to another wonderful truth: music. Music becomes Bobby's bargaining chip against time; he's not only singing, but also playing piano, drums and guitar before he even hits his teens. Music takes him into a world beyond the Bronx, and beyond sickness. It's a world of effortlessly swinging songs, and couples dancing to the lilt of Bobby's voice. Bobby has a plan, and no heart ailment will stop him.

News & Interviews for Beyond the Sea

Critical Consensus: "Superman" And "Devil" Are Certified Fresh
Chris Weitz Getting Into the "Game"
Kevin Spacey to Face Off Against Superman

View All Beyond the Sea News

Critic Reviews for Beyond the Sea

Many people under 40 may not even remember Bobby Darin, let alone know about his remarkable life story. Beyond the Sea may rectify that problem and stand as a wonderful tribute to an amazing talent who left us all too soon.

Gimmicky recounting of the crooner's life.

Much more 'Splish' than 'Splash.'

Spacey the actor bails out Spacey the director. He's been talking about his abiding love of Darin for quite some time, and he nails Darin in look, deed and buttery croon, making up for many of the film's structural deficiencies.

This vainglorious biopic about Bobby Darin is really about what the '60s pop singer and actor means to Kevin Spacey.

If Spacey's age problem proves an insurmountable distraction for literalists and Darin fans, his admirers will no doubt relish the chance to watch him sing, dance and basically take over the screen for two hours.

[Beyond the Sea is] about a man; a man who only wanted to be remembered as a human being and a great performer. And it's a film that may just garner an Oscar nod for another great performer, Kevin Spacey.

Beyond the Sea ranks among the worst films of its sub-subgenre because its director/star only seems interested in making the film to exploit his remarkable physical resemblance to the title character.

Spacey doesn't pass as Darin, and everything else is flat.

More than 10-years in the making, the movie is a labor of love from Kevin Spacey, and Kate Bosworth is superb as Darin's charming wife Sandra Dee.

A two hour shoulder shrugger for those too young to even know who Bobby Darin is, and what all this fuss is about.

There is no doubt that Spacey does a great job of portraying the entertainer, but he's so wrapped up in this project that he fails to see that it's become a collection of musical numbers without any real heart.

Audience Reviews for Beyond the Sea

Kevin Spacey did a great job putting together the story of Bobby Darin, one of the most popular singers of his time in the 60's. Spacey directed and starred and even did his own singing and dancing in this film that chronicles Darin's childhood then skips ahead to when he's older and just starting out. Darin didn't have drug and alcohol problems or anything else that gets thrown into your usual run-of-the-mill biopic. Bobby Darin was given just years to live, so he pretty much lived his entire life on borrowed time. He had the usual marital troubles and later finds out his sister is actually his mother, but - for better or worse - the story doesn't have the drama and theatrics that most films of these types seem to delve into and ride until the end. Still, Spacey did a terrific job in capturing the spirit and joy that performing did for Darin back in the day.

This movie did not live up to its tagline and all in all lacked a certain lustre that this kind of film demands. That's not to say that Kevin Spacey did a bad job directing or acting; he did them very well. I just don't know if he was the right person to do it.

This was great, I didn't know very much about Bobby Darin and Kevin Spacey certainly played a great part.

Kevin Spacey is absolutely marvelous. A teriffic performance. He sing's, writes, produces and directs a magnificent movie. Kate Bosworth is fantastic. This is a wonderful film. It's an sensational, riveting, extroadinary and brilliant biopic

Beyond the Sea Quotes