Beyond the Time Barrier1960 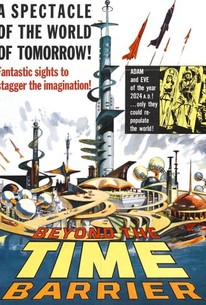 Beyond the Time Barrier Photos

Low-budget science-fictioner in which a test pilot attains a speed that propells him into the future, where he discovers that humanity now lives in an underground society which is dominated by an evil despot.

Vladimir Sokoloff
as The Supreme

Boyd 'Red' Morgan
as The Captain

Critic Reviews for Beyond the Time Barrier

Fascinating sets show the geometric world of the future.

A prime example of low-budget mid-century cheese, more valuable now as an artifact of that era than for any supposed entertainment value it might have possessed in 1960. It can only be enjoyed ironically.

Not really good, but such a fascinating no-budgeter that it's mesmerizing.

The cardboard sets and flat acting and primitive story line reminded me of the '50s Captain Video TV program I got a kick out of watching as a kid.

Audience Reviews for Beyond the Time Barrier

The science part that sets this pic into motion is actually pretty cool and well thought but the execution is lame, with cardboard sets that are horrible to look at and it just drags forever and ever, never really going anywhere or giving any decent payoff in the end. This what b-movies in the 60s looked like.

Beyond the Time Barrier Quotes