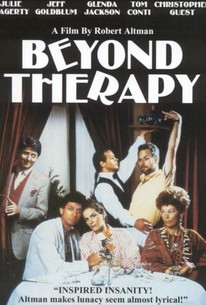 Based on the play by Christopher Durang, Robert Altman's Beyond Therapy is a comedy set in New York City but filmed in Paris, where Altman was living at the time. Arrogant Bruce (Jeff Goldblum) grows bored with his live-in lover, Bob (Christopher Guest), so he looks for a change by placing an ad in the personals. He meets neurotic Prudence (Julie Hagerty) at a French restaurant and they prove to be a terrible match-up. Then Bruce goes to see his therapist, Charlotte (Glenda Jackson), who has a strange disorder herself. In the same building, Prudence goes to see her own bizarre therapist, Stuart (Tom Conti), who believes in sex with his patients. Charlotte and Stuart also have an arrangement where they meet for anonymous sexual trysts. Meanwhile, Bob's mother (Genevieve Page) is worried about her son's relationship with Bruce and she interferes with everything.

Nicole Evans
as The Cashier

Critic Reviews for Beyond Therapy

There's no special logic at work. The performances are good, but the film has been assembled without an overriding sense of humor and style.

It's a movie in which every scene must have seemed like a lot of fun at the time, but, when they're edited together, there's no pattern to the movie, nothing to build toward, no reason for us to care. It's all behavior.

He needs more characters to play with than Durang's analyst's couches and restaurant trysts can provide, and simply hasn't the body count to fill in the vacant frames.

Altman sometimes gets close to the split-second timing that is required to make farce work well. But close in a farce is not good enough.

Ultimately, Beyond Therapy ends up being a tiresome slog, cutting inherently between various 'therapy' sessions between Conti and Hagerty, Jackson and Guest/Goldblum with no real rhyme or reason.

The script takes the movie on the right path... but it is weakened by Altman's inability to handle this genre. [Full Review in Spanish]

Robert Altman adapted Christopher Durang's play for this peculiar comedy that can't ever seem to find its rhythm.

Audience Reviews for Beyond Therapy

In the 1980s Robert Altman released a string of films that were based on popular plays, "Beyond Therapy" was one of them. While the film has some laugh out loud moments, some very funny dialogue and extremely spirited and zany performances, Altman's lack of narrative focus ultimately hurts the film. Altman's directorial voice is lost here, because in all honesty, this seems like a direct copy of a Woody Allen picture. There isn't much originality to speak of. Plus, with a film that contains such an array of wackos, you need something for the audience to ground themselves in, and "Beyond Therapy" has none of that- no every man, no coherent arc. This is a funny but extremely unfocused and messy film.