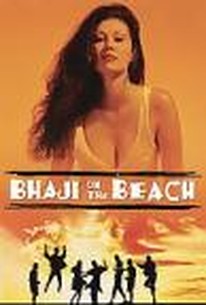 Critics Consensus: Beautifully filmed and cleverly written, Bhaji on the Beach makes the most of its talented ensemble cast.

Critics Consensus: Beautifully filmed and cleverly written, Bhaji on the Beach makes the most of its talented ensemble cast.

Critic Consensus: Beautifully filmed and cleverly written, Bhaji on the Beach makes the most of its talented ensemble cast.

Bhaji On the Beach Photos

An assembly of Indian women, both immigrants and their British-born brethren, travel to the English seaside in this comic drama. The plot focuses on a trio of young women caught between tradition and independence: Ginder (Kim Vithana), who risks the uncertainties of social ostracism and single motherhood in order to escape from her abusive husband; Hashida (Sarita Khajuria), who jeopardizes her promising future in medical school when she becomes pregnant by her West Indian boyfriend (Mo Sesay); and Simi (Shaheen Khan), who integrates her feminist politics and her commitment to her culture by heading up the Saheli Asian Women's Group. To provide the women of her community with a chance to get together and enjoy themselves, Simi organizes a ladies-only trip to Blackpool, a seaside resort town that resembles Atlantic City. Along for the ride are boy-crazy teens, conservative matrons, and a garish visitor from Bombay, each of them offering a singular perspective on Asian immigrant culture. Asha (Lalita Ahmed), a middle-aged wife, mother, and newsstand proprietor, spends much of the trip experiencing picturesque visions in which an Indian goddess reprimands her for the missed opportunities in her life. Introspection gets pre-empted, however, when Ginder's husband (Jimmi Harkishin) and his brothers show up looking for a little involuntary family reunion. Bhaji on the Beach screenwriter Meera Syal would go on to pen the award-winning novel (Anita and Me) and work on Goodness Gracious Me, the BBC's Indian/Pakistani sketch comedy show. Fans of Anglo-Asian cinema will recognize actress Souad Faress, who plays the colorful Rekha Tendon, from her role as the haughty Cherry in My Beautiful Laundrette. Akbar Kurtha, who plays one of Ginder's brothers-in-law, would go on to portray the title character in My Son the Fanatic. Writer/director Gurinder Chadha would return with another ensemble feature, What's Cooking?, in 2000. ~ Brian J. Dillard, Rovi

Critic Reviews for Bhaji On the Beach

In the film, beachside donkey rides, ferris wheels, striped deck chairs and the blue expanse of the ocean aren't just seasonal pleasures, they're images of liberation.

The scenes in Blackpool are vibrant, funny and finally quite complex and powerful.

There is flavoursome charm in the performances and the seedy-photogenic setting.

Chadha has a great eye, and there's scarcely a frame of Bhaji on the Beach that doesn't offer up something beguiling or entrancing.

Pleasant enough while it lasts (notwithstanding some overemphatic fantasy scenes, in mockery of the Bombay cinema, and a heavy-handed face-off with a wife-beater), but nothing much to remember the next morning.

The film raises tough questions of tradition and assimilation, and rightly refuses to give any answers.

The boardwalk, fountains, sandy beaches and a carnival atmosphere electrify and intensify the emotions of the day. By the end, you don't know if everything will be all right, but you have no doubt that everything will be different.

A perceptive, shrewd and funny view of the culture clash (though the clash is a very gentle one).

It's not always funny, its not always pretty it's not even consistently well-shot but thanks to a wonderful cast and sincere direction Bhaji an the Beach is a delightful film full of surprises that will stick in your heart like a deep-fried dumpling.

It's a well-balanced movie that performs a rare triple feat - to make you laugh, feel and think.

"Bhaji on the Beach" is an ambitious film that doesn't always work. Yet there is enough there to warrant a look.

Audience Reviews for Bhaji On the Beach

Bhaji On the Beach Quotes