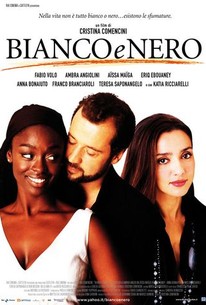 An adulterous affair between an Italian IT specialist and a black woman throws both of their lives into a frenzy in this romantic comedy from director Cristina Comencini. Carlo works with computers, and feels awkward whenever his wife Elena drags him to charity events promoting racial integration. Bertrand is a respected colleague of Elena's who is married to the beautiful Nadine. When Betrand is invited to speak at one of Elena's functions, Carlo crosses paths with Nadine, and the sparks start to fly. Later, after seeing Nadine a few more times socially, Carlo seduces her. But when word of Carlo and Nadine's affair gets out, their families seem more upset by the interracial aspect of their infidelity, than the unfaithfulness to their spouses. ~ Jason Buchanan, Rovi

There are no critic reviews yet for Bianco e Nero (Black and White). Keep checking Rotten Tomatoes for updates!

Don't worry, it's not a movie about Inter's football followers... In this Italian movie Carlo is the main character and he is one of those guys who just hate to give money for "African children" and always manages to run away from it... a little bit against all the "blacks" in Italy... until one day he meets Nadine... bosses wife! I won't give you too much of the story, but I'll say it is wonderful presentation of the everyday Italians views of the racial issue and everyday life in today's Italy. Fabio Volo was the right choice because of the looks but acting wise he owes us a lot! If he didn't have Ambra Angiolini next to him there could be a huge gap in the acting department which was closed with the help of another actor - Eriq Ebouaney. Director Cristina Comencini managed to earn around 3 million pounds in 6 weeks which are very high earnings for an Italian film. It is a movie for middle age men and women and probably will make them think what life is about... It had more potential but delivery was poor!