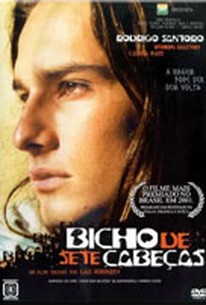 Lais Bodanzky makes her directorial debut with this harrowing expose of an archaic Brazilian mental hospital, based on a memoir by noted activist Austregesilo Carrano. The film revolves around Neto (Rodrigo Santoro), an average Brazilian teenager who likes to skateboard, rock-and-roll, drink beer, and smoke the odd joint. His youthful waywardness infuriates his severe, demanding father (Othon Bastos), who longs for his son to be a success. One day, Neto hits the road with his buddy Lobo, but when Lobo cheats him, he finds himself out of cash. Forced to beg strangers for bus fare, Neto is seduced by a beautiful older woman. When he returns a couple days later, his father is apoplectic. When, days later, he gets picked up by the cops for vandalism and for possessing a joint, his father completely wigs out and has him institutionalized. The mental hospital is something out of the dark days of the Soviet Union -- patients are drugged, catatonic, and often bound to their beds. Neto tries to explain his situation, but the hospital refuses to release him. They have to keep their numbers up to meet the patient quota. If Neto was sane before his stay, he was left unhinged and emotional fragile upon his release. Soon his depression and his mood swings land him back in an asylum where, out of desperation, he does something violent. This film was screened at the 2001 Toronto Film Festival. ~ Jonathan Crow, Rovi

There are no critic reviews yet for Bicho de Sete Cabeças (Brainstorm). Keep checking Rotten Tomatoes for updates!

Both a showcase of Rodrigo Santoro's talent and an exposé of the horrible conditions of mental institutions in Brazil (based on a real life story), this is an tragic and unsettling drama that looks quite realistic with its use of handheld camera and blueish cinematography.