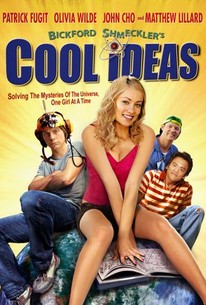 Reclusive college freshman Bickford Schmeckler (Patrick Fugit) is a virtual fountain of cool ideas, and he records every single one of them in his prized, steel-bound notebook. When the notebook is stolen by hedonistic sorority girl Sarah (Olivia Wilde) during a toga party and subsequently comes into the possession of schizophrenic campus eccentric Spaceman (Matthew Lillard), the desperate Bickford embarks on a frantic quest to recover his most prized possession and prevent his life's work from being credited to someone else. John Cho and Fran Krantz star in a cinematic labor of love from writer/director Scott Lew - an ambitious first-time feature filmmaker who worked for eight years to bring his creative vision to the big screen.

Will Burke
as Overworked Student

Bickford is an assured first feature for former Beacon Pictures exec Lew, with a winning cast and an infectious spirit.

It's the sort of small-scale comedy that invites multiple viewings.

What should be the American Pie of college genius comedies suffers from a lack of imagination and an absence of impudence...

Director Scott Lew is not without his own cool ideas (having Reno 911's Ben Garant and Thomas Lennon play campus cops is genius), but his focus is all over the place

The film's early momentum wears off, and we realize the movie's not as amusing or entertaining as it wants to be.

Packing quite a bit of wit, wisdom, craziness, and creativity into its slick-looking and efficient frame, Bickford Schmeckler's Cool Ideas is a bizarrely charming little diversion.

a little slow, but still entertaining and a great story.

"You killed her? No! How?! With a butcher's knife?!" Disaffected college student Bickford Shmeckler (Patrick Fugit) has filled a book with his cool and revolutionary ideas about reality. One night at a party, beautiful kleptomaniac Sarah (Olivia Wilde) stumbles into his room, and makes off with his book of ideas. Over the next few days, Bickford frantically tries to track the book back down, while reading it has a huge affect on the lives of Sarah, an entire Dungeons and Dragons club, a horny cosmology professor, and a group of homeless nuts led by a man named Spaceman. Yes, the movie really is that random. The most random and peculiar indie comedy that I've seen in a while. As you can tell from the description, this is a pretty weird movie. It's low-budget, for sure. Lots of obscure tunes from college radio on the soundtrack, and lots of "alternative" humor. I found the attempts at humor to be more bemusing, than anything else. I only recall laughing out loud once (thanks to a few cameos from Reno 911! and a rape joke that came out of nowhere). If the idea of a book giving women brain orgasms sounds funny to you, then you'll be right at home, here. I don't really think I can recommend that anyone who's not a massive Olivia Wilde or Patrick Fugit fan go out of their way to catch this one. The movie takes a turn for the dramatic at the end that doesn't fit well with anything that came before, and the entire script just seems like it could have used some more work and development.

movies like this really make me want to vomit at the sight of the tiny "comedy (yes, comedy) central logo at the bottom right corner. why doth thou show movie this is not funny? what does this all mean? is this a dream? WHY GOD, WHY?!?