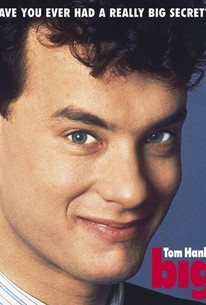 Critics Consensus: Refreshingly sweet and undeniably funny, Big is a showcase for Tom Hanks, who dives into his role and infuses it with charm and surprising poignancy.

Critics Consensus: Refreshingly sweet and undeniably funny, Big is a showcase for Tom Hanks, who dives into his role and infuses it with charm and surprising poignancy.

Critic Consensus: Refreshingly sweet and undeniably funny, Big is a showcase for Tom Hanks, who dives into his role and infuses it with charm and surprising poignancy.

More than anything else, 13-year old New Jerseyite Josh (David Moscow) wants to be "big". That's the wish he makes at an odd-looking amusement pier fortunetelling machine. The next morning, Josh wakes up-only to discover that he's grown to manhood overnight! (At this point, the part is taken over by Tom Hanks). Still a 13-year-old mentally and emotionally, Josh decides to hide out in New York City until he can figure out what to do next. He lucks into a job with a major toy company run by kid-at-heart McMillan (Robert Loggia). By cannily bringing a child's eye view to McMillan's business, Josh rises to the top-and in process, he falls in love with fellow employee Susan (Elizabeth Perkins). But he's still a kid, and he'd like to go back to his own world and own body. Written by Gary Ross and Anne Spielberg, Big proved a crucial success for budding director Penny Marshall, who'd work harmoniously with Hanks again on the radically different A League of Their Own. The cinematography was by Barry Sonenfeld, who went on to become a director himself with The Addams Family. That Big was heavily reliant upon the input of Tom Hanks and Penny Marshall was proven by the failed attempt to turn the property into a Broadway musical. ~ Hal Erickson, Rovi

Jonathan Isaac Landau
as Boy in Leaves
View All

Director Penny Marshall doesn't hammer any themes or satire into the film; she, quite shrewdly, keeps Big likeably small. The comedy is natural and unforced, in no small part because of Hanks' wonderfully slapstick performance.

The film succeeds largely because of the splendid performance of Tom Hanks -- who is irresistibly funny as "big" Josh.

Tom Hanks is marvellously child-like as Josh, all restless energy, innocence and real pleasure in the liberation that being grown-up allows him.

A funny, bittersweet film that opens as a cautionary tale about growing up too fast, but deepens into a movie about the unplumbable gulf between childhood and adulthood.

Penny Marshall brings a logic to the premise that is sustained through most of the movie. And where the other movies snickered at the sexual possibilities in the idea, she faces up to them with both candor and taste.

Full of exquisite moments that help the film become both continually hilarious and unforgettably unique.

Oh, this movie. It's not sad, but it makes me tear up every single time without fail. It's delightfully 80s and Tom Hanks is an adorable heartbreaker.

What makes this all work, of course, is Hanks himself, who brings remarkable authenticity and simplicity to the role. He makes being a kid seem as wonderful as it was, and as scary and as confusing too.

Hanks, as a stranger in a strange land, gives us equal portions of laughs and insights into the worlds of both adults and adolescents. Big also offers up a very funny satire of corporate ladder climbing.

Big may well be a formula fantasy movie, but Penny Marshall's polished direction combined with Hanks's gauche charm make it the best of the spate of body-swap movies turned out by Hollywood in the late 1980s.

A thirteen-year-old boy wishes to be big, and his wish comes true. Except there's no time travel element, which really sticks in my craw. This kidult immediately lands a job in the big city and masquerades as a genius toy titan for an entire month? A thirty-something woman has sex with a pre-pubescent? The floor piano scene IS really cute, but was 1989 just a slow enough talent year for Tom Hanks to be Oscar-nominated for his perfectly ordinary performance?

Big is a pretty good film that I enjoyed, but I felt it wasn't as good as what everyone has said about. The film is good for what it is, but it leaves a lot of room for improvement. I enjoyed Tom Hanks in the film, but he has made far better films later on in his career. The film is pretty funny, but it could have been improved upon in some areas. The cast do a fine job and there is enough good humor to make this film worth watching. At times the film is cheesy, but overall it is a fun and entertaining film that has lots to offer. Although it is far from being the masterpiece that critics have claimed it to be. Tom Hanks is good in his role, but he has starred in better movies. Big has heart, and it's something that lacks in many of today's movies. Of course the film is not without its flaws, but it overcomes them by being an amusing film that viewers of all ages can enjoy. If you want to watch one of Tom Hanks earlier hits, then Big is the one to watch. Like I said, I found some parts to be a bit corny, but overall, the story and cast make it enjoyable and there are enough good gags to make it worthwhile. The film has enough memorable moments top make it a stand out comedy that will entertain you from start to finish. Although far from perfect, I really enjoyed the film for what it was and it is charming despite it being a bit silly, but in the end that's the point. After all it's a 12 year old trapped in a 30 year olds body, so you're going to watch an adult act like a kid, which I must admit is amusing. A must see film if you love Tom Hanks, and this film would showcase his early skills as an up and coming actor that would make an impact on film.

After many years, this formula works wonders. Every turn it takes, it's entertaining. Not much more then that. Tom Hanks was fantastic.

Big is unbelievably charming and the performance by Hanks is totally sweet and believable. The Oscar should have went to Hanks in this uniquely amazing comedy