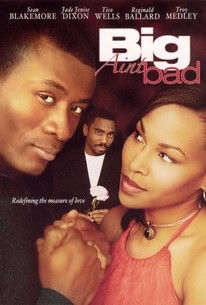 Directed by Ray Culpepper, Big Ain't Bad chronicles a young couple's (Sean Blakemore and Jenise Dixon) rocky path to the altar. Though they are well matched and seemingly happy, the groom finds himself too weak to resist engaging in a one-night stand, which, understandably, sends the would-be bride running in the opposite direction. Luckily, or so it would seem, she finds a wealthy suitor perfectly willing to include her among his accolades. Blakemore, now thoroughly lovelorn, sets off in hopes of proving that status and expensive gifts aren't valuable if there's no love involved. The film also features Tico Wells, Jemmerrio, Reginald Ballard, and Montana Taylor.

Corey Tyler
as Pierre
View All

There are no critic reviews yet for Big Ain't Bad. Keep checking Rotten Tomatoes for updates!

There are no featured audience reviews yet. Click the link below to see what others say about Big Ain't Bad!