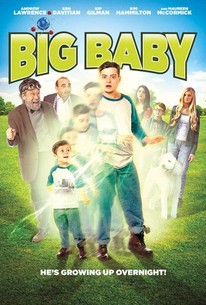 A mad scientist's invention puts his kid brother in jeopardy in this action comedy written and directed by Stephen Langford. Dr. Simon (Kip Gilman) creates a genetics-altering device that can change the age of its users. As the doctor is dealing with thieves looking to get their hands on the machine, his young grandson plays with the machine and accidentally switches his body to that of a 30-year-old. Now, Dr. Simon must track down his grandkid (Andrew Lawrence), who's in the body of a grown man, while simultanously evading the malicious villains out to claim his creation for themselves.

There are no critic reviews yet for Big Baby. Keep checking Rotten Tomatoes for updates!

There are no featured reviews for Big Baby at this time.