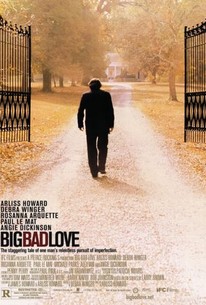 Critics Consensus: A boozy depiction of a struggling writer, Big Bad Love is too messy and self-indulgent.

Critics Consensus: A boozy depiction of a struggling writer, Big Bad Love is too messy and self-indulgent.

Critic Consensus: A boozy depiction of a struggling writer, Big Bad Love is too messy and self-indulgent.

Actor Arliss Howard made his debut as a director with this emotional drama adapted from a handful of short stories by Larry Brown. Barlow (Arliss Howard) is a deeply troubled Vietnam veteran who has been chasing a career as a writer, with little success; when he isn't struggling with his typewriter, he's usually drinking, and his wild mood swings and alcoholic fits of rage have driven away his wife Marilyn (Debra Winger), who has taken their son Alan (Zach Moody) and daughter Alisha (Olivia Kersey) with her. Barlow would like to see his children, but Marilyn refuses to allow it until he catches up on his alimony and child support payments; one of Barlow's few loyal friends, Monroe (Paul LeMat), a buddy from his Army days, is able to get him work as a house painter. With steady paychecks, Barlow is finally able to clear his debts to Marilyn, but she refuses to acknowledge that he's made much progress in turning his life around, and he doesn't get much more emotional support from his ailing mother (Angie Dickinson) or his friend Velma (Rosanna Arquette). Big Bad Love marked the second screen pairing for husband-and-wife Arliss Howard and Debra Winger; it was also Winger's first screen appearance in six years. Acclaimed songwriter Tom Waits composed the film's original score. ~ Mark Deming, Rovi

Kevin Mitchell
as Twin No. 1

Matt Mitchell
as Twin No. 2

Jo-Ann Robinson
as One Night Stand

Cool Man
as Himself

R.L. Burnside
as Himself

A mess, but it's a sincere mess.

Though you couldn't call Love a complete success, it's packed with talent and intelligence, wayward poetry and bluesy longing.

A movie that can't get sufficient distance from Leroy's delusions to escape their maudlin influence.

The movie is obviously a labour of love so Howard appears to have had free rein to be as pretentious as he wanted.

A well crafted directorial debut from Howard who handles this quiet tale of an artist's redemption with a firm hand.

This ambitious drama about a Vietnam vet trying to create fiction out of his troubled life and former marriage (to Debra Winger) is messy, rambling, and overlong.

Makes you wish you'd stayed at home with a book -- preferably one of Larry Brown's.

The very definition of what critics have come to term an "ambitious failure."

Offhand, if you'd like to see some great imagery about writing, then you should by all means rent this and skip to the good parts.

A flawed effort at best, but intriguing nonetheless.

[font=Century Gothic]In "Big Bad Love," Leon Barlow(Arliss Howard, who also directed and co-wrote) is an aspiring writer who tapes his rejection letters to his bathroom wall. His wealthy friend, Monroe(Paul Le Mat), gets him the occasional job housepainting, where they hang out together, followed by much drinking of beer. Due to his economic situation, Leon is often unable to come up with the child support for the two children he walked out on.[/font] [font=Century Gothic][/font] [font=Century Gothic]"Big Bad Love" is a rambling stream of consciousness movie that stays one step ahead of total incomprehension. It is a tricky approach to take with a movie because the reality and the fantasy can be hard to tell apart at times but here it works due to Howard's keen visual eye which does a very good job of showing Leon's mental state.(And it is especially clear that Leon has not had sex in a good long while.) But a little of that goes a long way, and after a while, it does get tedious before a huge event shakes up the movie, shoving it into an entirely new direction. In the end, the movie might have worked had it been about 20-30 minutes shorter.[/font]