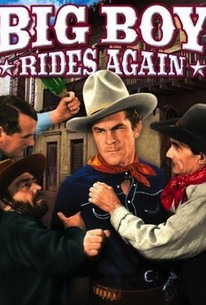 More of a whodunit than a straight Western, this Guinn "Big Boy" Williams vehicle from low-budget Beacon Pictures at least attempted something a bit different. Having just revised his will under the watchful eyes of lawyer Hartecker (William Gould), rancher John Duncan (Charles K. French turns down a proposal from neighbor Tap Smiley (Lafe McKee) to combine their properties. When Duncan's dog dies after eating pudding meant for his master, the old man suffers a heart attack. He has barely recovered from the shock when a masked intruder enters to finish him off with a bullet to the heart. John's son and heir, Tom (Williams), arrives to take control of the ranch and to search for his father's killer. The investigation leads directly to a gang of outlaws led by...? Well, that is the question, but Tom's detective methods ultimately reveal the identity of the masked intruder, a revelation than comes as something of a shock to the little community.

There are no critic reviews yet for Big Boy Rides Again. Keep checking Rotten Tomatoes for updates!

There are no featured reviews for Big Boy Rides Again at this time.