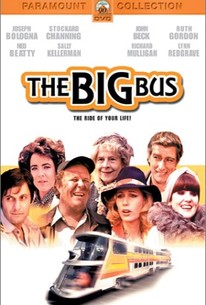 The Big Bus is set aboard a nonstop, nuclear-powered luxury bus commandeered by Joseph Bologna. Naturally, Bologna is a tortured hero with a deep dark secret (he keeps insisting he didn't eat all those passengers on his last disastrous drive). Stockard Channing and Harold Gould play the designers of the big bus, and of course they have a few skeletons in their closet. In fact, there isn't a passenger on the all-star manifest that isn't hiding something. The supporting cast features contributions by René Auberjonois (parodying his M*A*S*H role), Ned Beatty, José Ferrer, Ruth Gordon (doing a devastating send-up of Airport's Helen Hayes), Sally Kellerman, Richard Mulligan, and many others; Murphy Dunne contributes a memorable bit as a smarmy cocktail pianist. Unfortunately, The Big Bus was dumped onto the summer 1976 release schedule without fanfare by Paramount, and it sank without a trace.

Richard B. Shull
as Emery Bush

Harry Frazier
as Passenger
View All

Critic Reviews for The Big Bus

You should never feel the creators desperately trying to force laughs where they don't naturally exist. That is the main problem of James Frawley's The Big Bus.

What we have here is a strident comedy which is wholly off-target.

Before there was "Airplane," there was "The Big Bus." The granddaddy of the disaster spoof movies came out in 1976, and despite its unevenness, it's quite the hoot.

The Big Bus [is] a consistently clever comedy that had the misfortune of being a couple of years ahead of its time.

The Big Bus can be hit-or-miss in its humor. But the hits are fairly big and the misses are comparatively small.

I'd like to pretend it's a better movie than it is... its failings aren't gross and its modest pleasures are so far superior to the general run this slummy summer season that I feel very kindly toward it.

Audience Reviews for The Big Bus

Very much a mixed bag with a lot of talented performers trapped in this scattershot mess. Tries to lampoon the disaster movie craze and scores occasionally but mostly of the jokes fall flat.