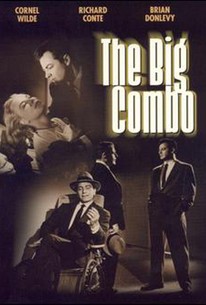 The Big Combo is a nervous, claustrophobic gangster picture directed by the always fascinating Joseph H. Lewis. Cornel Wilde is an honest 90-buck-per-week cop who runs afoul of mob boss Richard Conte. Failing to bribe Wilde into laying off, Conte has the cop beaten up by his thugs. Wilde persists, even daring to pay attention to Conte's mistress Jean Wallace. Wilde eventually comes by the evidence he needs to bring the law down of Conte's operation. The best scene in the film -- indeed, one of the best sequences in all of film noir -- is the murder of mob flunkey Brian Donlevy, whose assassins thoughtfully turn off his hearing aid before administering the fatal shots (the scene is played in utter silence!) The most interesting aspect of The Big Combo is that, while Richard Conte is despicable through and through, he behaves throughout as if he is being victimized, managing to stir up a tiny bit of audience sympathy in the process.

News & Interviews for The Big Combo

View All The Big Combo News

Critic Reviews for The Big Combo

Noir wasn't new in 1955, but The Big Combo still found plenty of life within its limits.

It is done with grim melodramatics that are hard-hitting despite a rambling, not-too-credible plot, and is cut out to order for the meller fan who likes his action rough and raw.

Where the usual noir takes place in a nightmare world, this one seems to inhabit a dream: there's no longer fear in the images, but rather a distanced, idealized beauty.

Shadows and lies are the stars of The Big Combo, a spellbinding black-and-white chiaroscuro with the segmented texture of a spider's web.

A pond of shifting alliances and kinks

A fatalistic symphony of light and shade.

Conte is convincing as the maniacal hood, while Wilde is a good counter-balance to Conte.

Audience Reviews for The Big Combo

A vicious underworld kingpin (Richard Conte)(and the best thing in the movie) likes his job okay, especially the killing whoever I want part. Cornel Wilde plays the cop out to stop him, while Lee Van Cleef and Earl Holliman are (of course, cause they always are) the evil unthinking henchmen. This saga, while it looks good, lacks pep, vim, and vigor. Time to get that Saturday afternoon nap in.

The characters in "The Big Combo" aren't well-drawn or well-acted and there lies one of the film's biggest problems. While the script does have some interesting twists, it's flimsy and thinly written. Richard Conte provides a somewhat memorable performance, but the rest of the characters are instantly forgettable. "The Big Combo" works well when it comes to passing an hour and a half, but there's nothing about it that'll make you want to watch it again.

Cornel Wilde stars as detective in love with society girl and gangster's moll Jean Wallace whose suicide attempt gives him the name "Alicia"; the clue that could be the break he needs to bring the sinister kingpin down. The Big Combo is the kind of Film Noir that feels like it's trying a bit TOO hard to be Film Noir. It has much to admire, mostly from a stylistic standpoint and has some excellent visual moments, but underneath it feels a little stale. The plot is simplistic and rather episodic, it misses the witty, literary dialogue of the best of the genre and Wilde and Richard Conte as his evil nemesis make for rather bland protagonists. What makes the film are some superbly directed scenes of gritty violence that invariably lack these two characterless adversaries; the joy of the film is definitely to be found in the supporting cast. Best of all are the two sexually ambiguous assassins played by a young Lee Van Cleef and Earl Holliman and Wilde's burlesque queen love interest, someone I wished we'd seen a lot more of. If you're a fan of Noir it's well worth it for the highlights and cinematography but if you're new to the genre, there are much better starting points.

The Big Combo left me kind of flustered when it was over for a couple of reasons. First, the story was pretty weak. Cornel Wilde as the worn out and obsessed detective going after the city's kingpin played by the otherwise smug and dull Richard Conte. Throw in a somewhat cute but mostly dopey Jean Wallace for good measure and mix them all together in a script that could've easily been written by Edward D Wood, jr. But at the same time The Big Combo also embodies everything that film noir is from a visual standpoint. It's incredibly atmospheric and beautifully composed courtesy of cinematographer John Alton and brilliantly directed by Joseph Lewis that you just might find yourself forgiving all of it's shortcomings because it looks so damn good. Especially during the execution of... well, you'll see. And that finale is the stuff that dreams are made of. The Big Combo is the femme fatale of film noir movies--it's incredibly beautiful but on the inside it's pretty much rotten otherwise.