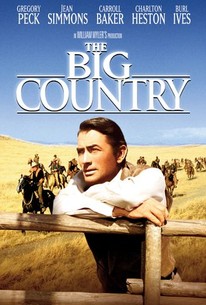 In The Big Country Gregory Peck plays a seafaring man who heads west to marry Carroll Baker, the daughter of rancher Charles Bickford. Bickford is currently embroiled in a water-rights feud with covetous Burl Ives, so both he and his daughter are hoping that Peck can take care of himself. But Peck, who doesn't belief in fisticuffs, appears to be a coward, especially when challenged by Bickford's cocksure foreman Charlton Heston. The far-from-cowardly Peck decides to distance himself from the machismo overload at the Bickford spread, settling for a romance with headstrong schoolmarm Jean Simmons, whose water-rich lands are being fought over by the two warring ranchers. When Jean is kidnapped by Ives' no-good son Chuck Connors, Peck decides to take action. ~ Hal Erickson, Rovi

Critic Reviews for The Big Country

An excellent Western. Jerome Morris' score is one of the all-time greats, standing in the company of Elmer Bernstein's The Magnificent Seven theme and Ennio Morricone's Spaghetti Western contributions as the genre's best.

Wyler showcases our own big country by demonstrating just how very small we are in comparison, the violent struggles of a few mere blips on the face of the sprawling landscape.

Burl Ives won the Supporting Actor Oscar for playing a patriarch in William Wyler's sprawling, overlong Western, though the award also might have been given to him for similar part in Cat on Hot Tin Roof.

As Charlton Heston explained ..., 'it's connected with the American ethos - America was made for Westerns.'

Audience Reviews for The Big Country

William Wyler's tricky Western about what happens when a big city (and perhaps college educated?) sophisticate (Gregory Peck) ventures into a volatile rural small town milieu, tricky because the "small town" is, in fact, the titular Big Country. "Ever seen country this big," one rube boasts. "Yes, I have," he replies before abruptly leaving the confused questioner. Interestingly, this is a two hour reply to the popular, pithy "book smart" insult. The reply is cleverly woven into several situations: a water rights dispute, a love affair power struggle, and a couple of father/son difficulties. The actors, the music, the cinematography are all good even if the story, and its point, are overlong. Worthy.

A classic pacifist Western that feels always fluid (even with a long running time of almost three hours) and is most certainly an intelligent allegory of Cold War, boasting a memorable score and a great cast, especially Burl Ives in an Oscar-winning performance.

Excellent Movie, Charlton Heston arrives in a western town looking like a typical gentlemen from the east, he has to prove himself not only to local cow hands but also to the father of his future bride. Story has many turns and twist. Interesting to see Burl Ives and Chuck Connors in this movie. A Classic that should be of value in any collection. 5 Stars