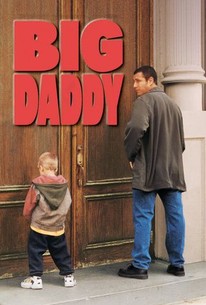 Critics Consensus: Adam Sandler acquits himself admirably, but his charm isn't enough to make up for Big Daddy's jarring shifts between crude humor and mawkish sentimentality.

Critics Consensus: Adam Sandler acquits himself admirably, but his charm isn't enough to make up for Big Daddy's jarring shifts between crude humor and mawkish sentimentality.

Critic Consensus: Adam Sandler acquits himself admirably, but his charm isn't enough to make up for Big Daddy's jarring shifts between crude humor and mawkish sentimentality.

Prospective parents everywhere, meet the world's least likely paternal role model: Adam Sandler! In Big Daddy, Sandler plays 30-year-old bachelor Sonny Koufax, a carefree slob who has never much taken to adult responsibilities; he works one day a week as a tollbooth collector, and spends the remainder of his time living off of a $200,000 reward he collected from an auto accident. All told, the life suits him just fine. However, as his old buddies start getting married and drifting away, Sonny realizes that if he doesn't do something soon, he could end up all alone for the rest of his life. When his most recent girlfriend, Vanessa (Kristy Swanson), indicates that she needs some time off because she's sick of being with a man who can't act like a grown-up, he decides that it's time to take drastic action to win her back. Conveniently enough, a little boy named Julian (Cole Sprouse and Dylan Sprouse) turns up on his doorstep, claiming that he's the biological son of Sonny's roommate and friend from law school, Kevin (Jon Stewart). The kid tells Sonny that he's from Buffalo, New York; Kevin has never been to Buffalo, New York, but no matter - Sonny foresees, in Julian, an opportunity to convince Vanessa that he can face adult responsibilities. He thus takes charge of the little boy over a long Columbus Day weekend, pretending to be Kevin. However, the plan doesn't work as expected, and the authorities hone in on a discovery of Sonny's real identity. Meanwhile, Sonny finds himself genuinely drawn to the tyke. Also supporting Sandler in Big Daddy are Joey Lauren Adams, Josh Mostel and Rob Schneider. ~ Mark Deming, Rovi

Peggy Shay
as Lady at Tollbooth

Jorge Buccio
as Himself

Steve Glenn
as Guy at Party

Amiable, schizoid and disposable, Big Daddy is just as formulaic as you might imagine.

This light yet earnest drama starring Adam Sandler deals openly with one of the most insidious elements in popular filmmaking -- the male screenwriter's relationship with his own father.

This lightweight, bubblegum caper synthesises robust, physical humour, self-deprecation and witty one liners. The main problem, as with most other dumb boy pictures, is that the supporting characters are underwritten.

Worst of all is the way Sandler wants to have it both ways: to muck around in gross-out humor one minute and then turn schmaltzy the next minute with some fraudulent business about how much he loves the kid.

Some so-so Adam Sandler for the evening.

The heavy-handed sentimentality provokes a most violent gag reflex.

Ending is predictably gooey but Sandler's edge staves off the sludge for long enough in an otherwise fresh and funny piece.

Those expecting another run of the mill Sandler film will either be pleasantly surprised or disgusted by this foray of his into new and different territory.

However simplistic Big Daddy is, it is also easy viewing.

Rewatched 2017 as part of a big dvd cull. Half half on whether I like this movie or not. On the plus side, enjoyed some of the cast including Joey Lauren Adams, Kristy Swanson and Leslie Mann. Plus it's a light 90's comedy. I have been enjoying revisiting those lately. What I hated - the whole long running "Hooters" gag and the humiliation of strong women by reducing them to a body part. I loathed that. Leslie Mann's character is now a doctor, but because Adam's character finds her unpleasant, she can be cut down to size by a quick reminder of a previous job she had. Ditto to Kristy Swanson's Vanessa, rejected Adam Sandler, so of course her fate is to mind up in Hooters. Really, really skeezy writing as far as I'm concerned. I did appreciate that it was fairly accepting of the gay male pair - surprising with that other train wreck Adam Sandler released which was highly offensive and homophobic. It was also kind of strange that the kid never once pines for or asks about his mother,but again, light comedy, not particularly deep. The parenting stuff was also pretty gross - peeing on people's shops etc. I did decide to keep the movie for now as I can't decide if the good out weighs the bad or not. I suspect in the future it will move on.

Of all the movies from Adam Sandler's prime era, this is probably the one I'd say is both the best, and my favorite. Perpetually slacker/idiot manchild Sonny doesn't want to grow up.He starts to see the need to change as all of his friends begin to move on, including his latest girlfriend who demands he make some changes. Conveniently enough, a little kind named Julian is left on his doorstep. A letter he's carrying claims that he's the biological son of SOnny's roommate Kevin. Kevin is out of the country on business, and, given his girlfriend's ultimatum, Sonny decides to pass himself off as Kevin and adopt Julian as his own. When things fall apart with his girlfriend, Sonny finds himself now stuck with Julian, and is forced to finally become a responsible adult. Despite the fact that this film is tonally uneven at times, and has a climactic courtroom scene whose conclusion and change is a tad too rushed, this is a pretty funny, sweet, and enjoyable film. Sandler's shtick hadn't yet gotten too tiresome at this point, and the film does feature his character make legitimate changes, even if, as I said, some of it is uneven. It's not totally buyable, but it's more convincing here than in something like Chuck and Larry. Many Sandler regulars show up here, and they do decent jobs with what they'e given. Rob Schneider is enjoyable as a restaurant delivery guy of vague Eastern European origin, and Steve Buscemi is a scene stealer as a homeless guy. I can't remember the guy's name, but the actor who plays the old drunk man is a riot, and he's easily my favorite character here. As Julian, twins Dylan and Cole Sprouse are quite good, and you really can't tell who is playing the character at any given time, which is impressive since they traded off every other scene. Leslie Mann is a delightful bitch, and Joey Lauren Adams is a sweet love interest for Sonny. Like a lot of Sandler productions, there's a vast amount of product placement, and here, the recurring one is Hooters. There's also heavy motifs involving lawyers and Styx. Overall, I think these things work, and don't stick out in a distracting way. The film is filled with great quotes and memorable moments, many of which have become prevalent inside jokes between a good friend and myself, namely "Hell yes!", "capetiller", "that's a shitload of piss", and many, many more. All in all, this is a decent movie. It's not perfect, but it manages a passable mix between sentimentality and crudeness, even if it isn't totally balanced.

What can you say about Adam Sandler? He's funny and he provides entertaining content. In case you're wondering, I'm talking about the 90's Adam Sandler. Adam Sandler today is just...well...shit. Big Daddy was obviously the last of Sandler's films that were mildly fun to watch, so let's get to it. Big Daddy has Sandler playing Sonny Koufax, a guy who's been dumped by his girlfriend for being immature. But when his roommate's biological son shows up at his doorstep by accident, Sonny decides to keep him to try and show his girlfriend he's responsible. The thing about this movie is that there are parts that are laugh out loud funny. Most of the humor is based off of Adam Sandler being himself, but it's still pretty funny. But there are parts where the humor felt too low brow and there were some parts where the laughs are suppose to come off slapstick jokes, but I didn't find those too funny. As a matter of fact, there was more slapstick then I would've wanted. Since it's an Adam Sandler movie, it has the cast that you would expect like Rob Schneider and Steve Buscemi. I actually liked Buscemi's character for some reason. I don't know why, I just liked watching a homeless guy and his need for a sausage McMuffin. The rest of the characters were just meh. Rob Schneider's character was kind of funny, and the kid Sandler ends up with did some funny things. Sandler's character you root for right away mainly because it's Adam Sandler playing him. The main problem with the movie is that it's really predictable. I knew where the film was heading and in the end, the movie just ends with some emotion that's really forced and empty. 90% of the movie is just comedy stuff, but near the end the director tries to shove a whole bunch of emotion and sadness into your face, but it doesn't work. The film is funny at times, but the funny parts are overshadowed by all the unfunny slapstick and low brow humor. Adam Sandler had a good run in the 90's. He was on SNL, he made some funny movies, but this film marks the beginning of when his films start to become dumb and unwatchable.

Sonny: I had a mother lined up for him, but she's bangin' the Pepperidge Farm guy and the kid won't stop peeing and throwing up, he's like a cocker spaniel.  "Nature called. Look who answered." Big Daddy is one of the better Adam Sandler comedies. None of his standard comedies are as good as the drama/comedies of Punch Drunk Love or Funny People, but he has made a few good ones(despite what everyone says). Sure his brand of comedy is the same in every film and that brand isn't incredibly intelligent, but their not meant to be. I'm not the biggest fan of Sandler, but I hate how everyone just rips on him constantly. Who gives a shit if he makes dumb comedies. Don't watch them. Many of his movies I don't like either, but he's gotten rich as fuck with this brand of comedy. I wouldn't stop making the same movie either.  Sonny is a 30 year old man who works one day a week and never gets up early enough to have McDonald's breakfast. His girlfriend is getting fed up with him. He does nothing, living off $200,000 that he got when his foot was ran over by a taxi. One day a kid shows up at his door. The letter says the kid is Sonny's roommates kid. Since his roommate is out, he decides to take care of him over the weekend until he can get him with a lined up foster family. Then, after spending time with him, he decides the kid may be exactly what he needs right now. The drama is predictable and the comedy is the same. Still, the movie doesn't have Sandler acting too ridiculous or sporting a dumb, supposedly funny, voice. The relationship with the kid isn't done intelligently, but still comes off as somewhat touching in a different way. There's more comedic scenes that work in Big Daddy then some of Sandler's other average works.  If you can just enjoy an unimportant and less than original comedy for an hour and a half, this isn't too bad. It's not going to win any awards, but it should entertain. There's much better comedies out there, but there's also much worse. I know there's a lot of people out there that think Sandler is the worst thing in the film industry, but he just isn't.