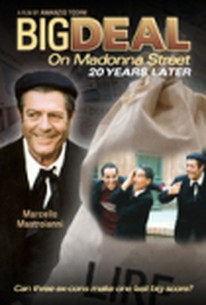 The vast differences 27 years makes between Italian comedy, the city of Rome, the stars in this film, and filmmaking itself are apparent in this 1985 sequel to the 1958 I Soliti Ignoti. Clips from the earlier film highlight the changes. Returning to reprise their roles are Marcello Mastroianni, Vittorio Gassman, and Tiberio Murgia. Tiberio (the character played by Mastroianni) has been released from jail, and he is unable to find work. Forced to reluctantly join up with the old gang leader Peppe (Gassman), Tiberio agrees to do a smuggling job when Peppe falls ill. Packing his vehicle with decoy passengers for the border guards, the run works well until everyone is heading back again -- then a series of misunderstandings lead to an unexpected turn of events and a mistaken killing. ~ Eleanor Mannikka, Rovi

Vittorio Gassman
as Peppe the Panther

There are no critic reviews yet for Big Deal on Madonna Street: 20 Years Later. Keep checking Rotten Tomatoes for updates!

There are no featured reviews for Big Deal on Madonna Street: 20 Years Later at this time.