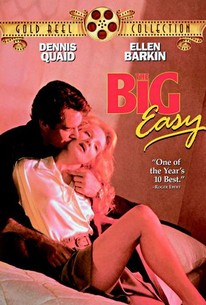 Critics Consensus: Loaded with atmosphere and drenched in the sizzling chemistry between Dennis Quaid and Ellen Barkin, The Big Easy remains one of the strongest -- and steamiest -- thrillers of the 1980s.

Critics Consensus: Loaded with atmosphere and drenched in the sizzling chemistry between Dennis Quaid and Ellen Barkin, The Big Easy remains one of the strongest -- and steamiest -- thrillers of the 1980s.

Critic Consensus: Loaded with atmosphere and drenched in the sizzling chemistry between Dennis Quaid and Ellen Barkin, The Big Easy remains one of the strongest -- and steamiest -- thrillers of the 1980s.

A film that captures the steamy, colorful essence of New Orleans, this crime thriller tells the romantic story of a classy detective whose investigation of a gangland murder lands him in trouble with the city's new District Attorney, a woman with a rigid penchant for following the letter of the law. Despite their differences, the two manage to work together and eventually fall in love. Unfortunately all of this leads them to have to fight for their lives when their investigation into the case and the corruption surrounding it gets them bumped up to the top of a hit man's list. ~ Sandra Brennan, Rovi

Jim Garrison
as Himself

News & Interviews for The Big Easy

View All The Big Easy News

Critic Reviews for The Big Easy

Until conventional plot contrivances begin to spoil the fun, The Big Easy is a snappy, sassy battle of the sexes in the guise of a melodrama about police corruption.

The Big Easy is an extremely enjoyable (and well-lubricated) vehicle for two actors who aren't quite yet stars, but should be.

The Big Easy is as atmospheric as they come, but -- surprise! -- it's also sharp and swift. Plus, it has ample amounts of chemistry -- the steamy, sexy kind.

The film's strength is director Jim McBride's seemingly easy way of presenting us with a New Orleans that is more malevolent and intoxicating than the tourist trap that some think it to be.

There is nothing easy about its own attitude, which is moral without being censorious.... with actors as engaging as Barkin and Quaid to say nothing of the ever-reliable Beatty the process is a delight to watch.

Barkin brings great delicacy and conviction to a part that is essentially a stock character: that favorite '80s stereotype: the sexually repressed but professionally successful career woman.

Set against a Cajun background, the movie is a bird's-eye view of a little-known culture operating within a totally familiar urban context. The effect is exhilarating.

Revels in its slight plot, noirish atmosphere, sassy interplay between main characters and its gumbo-like smells.

Quaid, a competent character actor who looks more like a leading man with each new film, has all the prize scenes in The Big Easy and he does the best he can with them. But they all seem to be castoffs from old Richard Gere movies.

After watching this sizzling crime thriller, you will be at a loss to explain why director Jim McBride failed to go on and take Hollywood by storm. At least the careers of Dennis Quaid and Ellen Barkin were boosted.

Audience Reviews for The Big Easy

Hoping for solid 80s film noir (such as the excellent Body Heat, and even Mindhunter), I instead got an unfocused film with a very uneven tone. Dennis Quaid is good, and the chemistry between him and Ellen Barkin works well, but the plot of the film is predictable and often borderline silly. Many other films have done the New Orleans atmosphere better, there's much more too it than clever humor and over-the-top accents. The film shifts from romance to mystery to drama, with no real sense of what came before or after it.

Like the synopsis on here says, this movie is more of a romance than a crime thriller or drama, they could have called it cops in love. I found the whole cop romance thing really boring, and the rest of the story even more boring.

The Big Easy is an 80s noir set to the colourful backdrop of New Orleans in which Assistant District Attourney Ellen Barkin is sent to investigate police corruption only to be seduced by morally dubious detective and local lothario Dennis Quaid. The biggest weakness of The Big Easy is its over reliance on the afore-mentioned "local colour", which means that the film is wall to wall chicken bones, hillbilly music and bizarre accents (Grace Zabriskie in particular sounds like a rastafarian with special needs after a stroke). This fact combined with the workmanlike plot and gratuitous 80s pyrotechnics at the end conspire to make it feel like a made for TV pilot episode for "New Orleans Vice". What can be admired about the film however is the chemistry between the cast; Barkin's fiery girl next door paired with Quaid's believable turn as a man finally meeting a woman that makes him want to re-examine himself makes for a charming and sexy couple and the amusing squadroom antics make for a very likable set of characters. Very formulaic but it avoids the usual 80s macho excesses and is still an entertaining, if rather dated detective story.

Although the whodunnit element is skimmed over pretty fast, the steamy Louisiana atmosphere and the steamy coupling of Quaid and Barkin make this one of the 1980's smartest, most attractive thrillers.