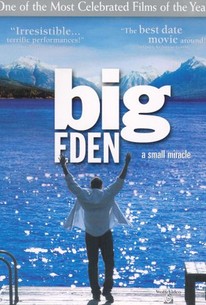 Critics Consensus: Though unrealistic, Big Eden has all the charm and sweetness of a fairy tale.

Critics Consensus: Though unrealistic, Big Eden has all the charm and sweetness of a fairy tale.

Critic Consensus: Though unrealistic, Big Eden has all the charm and sweetness of a fairy tale.

Big Eden is a tiny town tucked away in the timberland of northwestern Montana, where cowboys lounge on the porch of the general store to pass the time away, and keep their eyes on things. Although it's been years since he was back, Henry Hart, a successful but lonely New York artist, returns to Big Eden, the town of his childhood, to care for the ailing grandfather who raised him. Once home, Henry finds he must come to terms with his relationship to Dean Stewart, his best friend from high school, and the object of his unrequited love. Henry's feelings for Dean, which caused him to flee Big Eden nearly twenty years ago, seem to have only grown stronger over the intervening years. At the same time, Henry's reappearance sparks a transformation in Pike Dexter, the shy, unassuming, Native American owner of the town's general store. Pike is as surprised as anyone, and completely unprepared, when he finds himself falling in love with Henry. As this unspoken triangle unfolds under the scrutiny of Big Eden's community, nearly everyone in town develops a stake in its outcome.

Bekki Vallin
as Woman at Church

John Lystne
as Man at Church

Wayne Mansaw
as Man at Piano

Christianne Brown
as Woman in Car No. 1

Cori Wolff
as Woman in Car No. 2

Alecia LaRue
as Woman in Car No. 3

Tenika Capouch
as Schoolgirl No. 1

Morgan McCarthy
as Schoolgirl No. 2

Sarah Dramstad
as Schoolgirl No. 3

Amamda Upton
as Schoolgirl No. 4

Nicholas Gilhool
as Carl at Gallery

Brian Grossenbacher
as Man in Bar

Amanda Caldwell
as Choir Member No. 1

Doug Rommereim
as Choir Member No. 2

Isaac Simpson
as Choir Member No. 3

Jerry Fletcher
as Choir Member No. 4

"Transformers" Get Shia With Their First Cast Member
Trailer Bulletin: The Family Stone

What's subversive about it is that it looks just like any other romantic comedy except that some men love other men. Imagine that: social justice, racial harmony, peaceable kingdoms, and a cup of cappuccino at the general store.

Too concerned with being quirky and endearing and soon runs out of local charm.

Other than this gay-friendly gimmick, Bezucha's plot is as hoary as they come.

Echoes the mellow sensibilities of the TV series Northern Exposure.

Gross doesn't have the spark of a star, and most everyone else seems to hail straight from central casting.

There could have been a really cute movie in here, but it gets hampered down by its own clunkiness.

Lackluster at 24 frames per second, Writer/Director Thomas Bezucha's debut film, "Big Eden" is another love story about falling in love with the wrong guy, all the while not realizing the right guy is in love with you.

Big Eden focuses on relationships and creates a feel good fable that you won't find in ordinary Montana life.

The characterizations are nifty, but writer/director Thomas Bezucha's stodgy direction holds the story back; there's often a sense that the camera is missing the actors' best work.

In an age when self-acceptance and taking a hold of one's destiny is more relevant than ever, Big Eden may be the right inspirational movie for our evolving times.

I kinda love this movie. I liked that just because it envolves a gay man, the whole movie didn't have to dumb itself down or overwhelm itself with having to be a gay movie. His grandfather has a heart attack and so he goes back home. It's not stereotypical and I genuinely enjoyed that as a movie. They also avoided stereotypes about small towns which you almost never see! A nice, well-made movie.