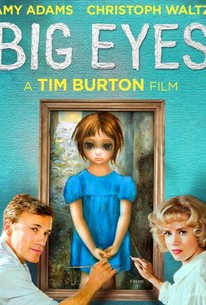 Critics Consensus: Well-acted, thought-provoking, and a refreshing change of pace for Tim Burton, Big Eyes works both as a biopic and as a timelessly relevant piece of social commentary.

Critics Consensus: Well-acted, thought-provoking, and a refreshing change of pace for Tim Burton, Big Eyes works both as a biopic and as a timelessly relevant piece of social commentary.

Critic Consensus: Well-acted, thought-provoking, and a refreshing change of pace for Tim Burton, Big Eyes works both as a biopic and as a timelessly relevant piece of social commentary.

Directed and produced by Tim Burton, BIG EYES is based on the true story of Walter Keane (Christoph Waltz), who was one of the most successful painters of the 1950s and early 1960s. The artist earned staggering notoriety by revolutionizing the commercialization and accessibility of popular art with his enigmatic paintings of waifs with big eyes. The truth would eventually be discovered though: Keane's art was actually not created by him at all, but by his wife, Margaret (Amy Adams). The Keanes, it seemed, had been living a lie that had grown to gigantic proportions. BIG EYES centers on Margaret's awakening as an artist, the phenomenal success of her paintings, and her tumultuous relationship with her husband, who was catapulted to international fame while taking credit for her work. (C) Weinstein

The stranger-than-fiction biopic Big Eyes is only the second of [Tim Burton's] non-animated pictures to have a woman at its center, and, perhaps not surprisingly, it's one of the richest portraits he's brought to the screen yet.

Burton had a chance to make a powerful statement on the struggle for a woman to achieve artistic recognition and instead settled for another childlike fairy tale.

Burton is telling a fascinating story here, and his confident sense of time and place, allied to Adams's adept performance as the increasingly assertive artist, provide many pleasures.

A feminist psycho-melodrama made without insight or dramatic excitement.

Ultimately boils down to being just another movie about an abusive marriage.

Big Eyes still has a fascinating story to tell, re-creating the world of Beat-era San Francisco and shooting a Hawaiian honeymoon in glowing Technicolor tones.

Tim Burton hits all the right feminist notes in setting the stage for her inspiring breakout. This is a must see.

...both a fascinating biopic and a truly feminist piece of cinema.

A skillful, if a little thin look at an artist's soul and the soulless shark who tried to steal it from her.

Even during its best moments, the film is only a simple, small, pleasant digression.

The movie has merit as a depiction of an unusual episode in art history. Unfortunately, the director does not probe the incident in any depth, and what he does make of it is largely wrong.

It cannot be denied that it is picturesque at times, but only to support the provocative histrionics of the neurotic performances of Christoph Waltz and Amy Adams. [Full review in Spanish]

Not at all what I expected from a Tim Burton movie. Quite pleasantly surprised. I had never heard of this artist, so the whole story was new to me. Though not exactly thrilling, it was quite interesting and I did find I got quite involved in the outcome. I loathed that husband by the end. Really couldn't stand him. I liked the court scene near the end. Amy Adams is great but unrecognisable. I thought the actress who played her young daughter was also very good.

If I were to speculate about what happened behind the scenes when they made this, it felt as if Tim Burton was given a sort of a dare: "you couldn't make a regular film if you tried!" and that this film was the answer to that challenge. Adams and Waltz seem to endeavor to stretch beyond the Movie-Of-The-Week limitations in place but fail, kitsch ultimately winning out over sentimentality. It's a generic film, surprisingly so.

When the Oscar nominations were released at the end of last year I was surprised to find that Tim Burton's "Big Eyes" was not on the list, like, anywhere. It seemed like a shoo-in, as it starred a two-time winner of Best Supporting Actor, and a five-time nominee in various acting categories. It was also a bio-pic, which the Academy always favors, and it was directed by Burton in his first bio-pic directorial effort since "Ed Wood." After seeing the film however, it became clear why it didn't get much acclaim. Read more at http://www.bluefairyblog.com/reviews/2015/7/21/big-eyes

It is true that Art should elevate, but this superficial, unimpressive biopic does pander to the lowest common denominator with a cliched direction, uneven pacing and serious tonal problems in a ridiculous trial scene in the end that only feels silly and artificial.