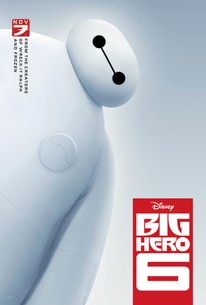 With all the heart and humor audiences expect from Walt Disney Animation Studios, "Big Hero 6" is an action-packed comedy-adventure about robotics prodigy Hiro Hamada, who learns to harness his genius-thanks to his brilliant brother Tadashi and their like-minded friends: adrenaline junkie Go Go Tamago, neatnik Wasabi, chemistry whiz Honey Lemon and fanboy Fred. When a devastating turn of events catapults them into the midst of a dangerous plot unfolding in the streets of San Fransokyo, Hiro turns to his closest companion-a robot named Baymax-and transforms the group into a band of high-tech heroes determined to solve the mystery. (C) Disney

T.J. Miller
as Fred
View All

The oversized and awkward, cute and caring Baymax could easily be the preferred stocking stuffing this Christmas.

What you might not have heard before is the way this film laces that basic story with beautiful themes that push back against some of the assumptions of the genre.

The film deals in a subtle and moving way with grief and teenage anxiety while serving up all the thrills of a big-budget animated movie with superhero protagonists.

An origins story ripe with innocence and loss, this anime-inflected treat harks back to Disney's big-hearted heritage even as it looks forward towards new worlds of innovation.

It makes for an entertaining spectacle, though less interesting than the one we started out with.

The Scooby-Doo-ish central plot is forgivable in a movie with so much visual verve, energetic action and a character so wondrously designed as Baymax.

The relationship between the boy and his robot is endearing and effectively told.

...there's a sentimental heartbeat and some painterly framing which mean this hugely enjoyable romp retains its unique character.

There are set pieces in Big Hero 6 that rival anything from the Marvel imaginations.

I'm sure many people, young and old, will go into Big Hero 6 and enjoy themselves. I just wished there was more going on here.

102 minutes of perpetual amazement that greatly complicated the choice of the best animation film of 2014. [Full Review in Spanish]

There's definitely a little something for everyone in this movie. Humor that both parents and kids can enjoy... a touching story, and action in every turn.

Great animation is so common anymore its nearly taken for granted, but regardless, its here in spades and with a story that kinda makes it all stick. A nerdy boy genius loses his caring big smarter brother in a disaster and comes back to society only with the aid of his brother's last effort, a warm medical automaton named Baymax. Also, the brother's just-as-nerdy friends prove quite helpful as well. Me likey.

Lovely and heartwarming. I was skeptical at first about the cute-bait of Baymax, the inflatable health care robot, but he turns out to be a matter-of-fact diagnostician with a subtly cute innocence and a great capacity for love and sacrifice. The futuristic blend of Tokyo and San Francisco makes for some beautiful animation design, but the third act baddie twist is confusing and unnecessary.

I found myself enjoying the first half of the film way more than the second half when it morphs into a generic superhero film. I was really liking the characters, story, and setting. I feel like if it weren't geared towards children this would have been one really dark and compelling story, but it goes a little too lighthearted and straightforward towards the end. This is not to say it is bad, I just think it felt like two different movies morphed into one with the first part superior to the second. It has great animation that is very colorful and pleasing to the eye and the voice actors do a good job. There's plenty of forced moments trying to get an emotional pull, but only some of them work. I also felt some of the funny gags went on too long. Man, I sound like a scrooge with how well this movie did critically and financially, but I guess the hype was kind of part of the reason I didn't enjoy it as much. It's perfectly fine for the kiddies and not at all a bad film, just not one that was something I got really excited about.

This film was well liked across the board. It had a few spots I enjoyed, but overall I found it to be average. That being said, I am not the target audience and you can't please everyone. In this case it looks like I am on the outside looking in.