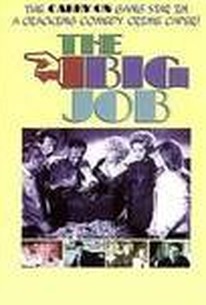 Though long defunct in the United States, the tiny production firm of Pathe continued churning out British programmers into the 1960s. Pathe's The Big Job stars Sidney James, Dick Emery and Lance Percival as a trio of none-too-bright bank robbers. Released from jail after 15 years, the intrepid trio makes a beeline for the location where they hid their stolen money. Uh, oh: the cash is squirreled away in a tree, and the tree has now been replanted in front of a police station. Thus, the "big job" of the title consists of the crooks' efforts to retrieve their swag without the Bobbies catching on. ~ Hal Erickson, Rovi

Critic Reviews for The Big Job

There are no critic reviews yet for The Big Job. Keep checking Rotten Tomatoes for updates!

There are no featured reviews for The Big Job at this time.