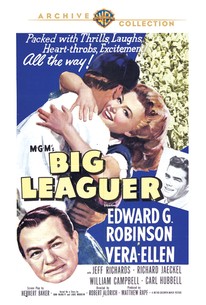 Big Leaguer was the inauspicious feature-film debut for director Robert Aldrich. Edward G. Robinson stars as the real-life Hans Lobert, the baseball scout in charge of the New York Giants' Florida training camp. Each year, a new crop of would-be ballplayers are given a two-week tryout under Lobert's supervision. The aspirants this time out include, Adam Polachuk (Jeff Richards), the son of a Polish immigrant who wants Adam to become a lawyer; Julie Davis (William Campbell), a tough guy from the streets of New York; Bobby Bronson (Richard Jaeckel), a cocky Ohio lad; and Chuy Aguilar (Lalo Rios), a Mexican youth whose skill on the ballfield compensates for his tenuous grasp of the English language. Gradually, Adam emerges as the film's central character, as he simultaneously tries to make good for Lobert, romance Lobert's niece Christy (Vera-Ellen), and keep his dad from finding out that he's not attending law school. Though Big Leaguer was held in such low esteem by distributor MGM that it became the first Edward G. Robinson picture not to be given a regular playdate in Manhattan, the film is worth seeing today, if only for the presence of such genuine big leaguers as Al Campanis, Carl Hubbell, Bob Trocolor and Tony Ravish.

Carl Hubbell
as Himself

Al Campanis
as Himself

Tony Ravish
as Himself
View All

Wintertime is still baseball time for diamond fanatics, and there's enough realistic action in this boyish little item to keep them from yawning.

The boring bush league baseball melodrama tosses softball batting practice pitches, as it tells of a lost era when baseball was the national past-time.

There are no featured reviews for Big Leaguer at this time.