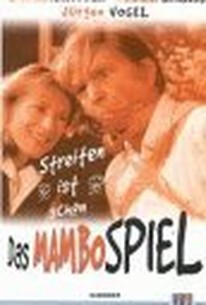 The husband-wife team of Michael Gwisdek and Corinna Harfouch star in this German comedy-drama. Maria (Harfouch) finds stolen cash in the trash, hides it from hubby Gregor (Juergen Vogel), and calls on former lover Martin (Gwisdek) who's trying to raise money to do an autobiographical film. Maria ditches Gregor and gets pregnant by Martin, but problems persist. Shown at the 1998 Berlin Film Festival, the film's alternate title is The Big Mambo. ~ Bhob Stewart, Rovi

There are no critic reviews yet for Big Mambo (das Mambospiel). Keep checking Rotten Tomatoes for updates!

There are no featured reviews for Big Mambo (das Mambospiel) at this time.