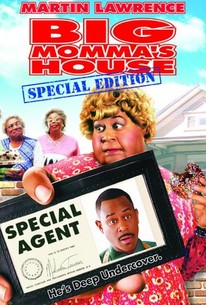 Critics Consensus: Big Momma's House is funny in some parts, but it is essentially a one-joke movie.

Critics Consensus: Big Momma's House is funny in some parts, but it is essentially a one-joke movie.

Critic Consensus: Big Momma's House is funny in some parts, but it is essentially a one-joke movie.

In this comedy, a cop assumes a new identity in his valiant battle against crime: an elderly grandmother! Malcolm Turner (Martin Lawrence) is an FBI agent who is a master of disguise and will stop at nothing to get his man. When a bank robber escapes from prison and goes on a violent crime spree, Malcolm is assigned to bring him in. The thief's girlfriend Sherry (Nia Long), who is also the mother of his child, lives in a small Southern town, and Malcolm plans to set up a stake-out in the house across the street from Sherry's. However, the house is owned by Big Momma (Ella Mitchell), an older woman with a sharp tongue and no patience for back talk, and when Big Momma has to leave town, it leaves her house suspiciously empty. Determined to maintain his cover, Malcolm disguises himself as Big Momma, and now has to convince Sherry (and everyone else in the neighborhood) that Big Momma's still in town. Big Momma's House gained considerable pre-production publicity when Lawrence fell into a coma while jogging in a heat wave before the film's start date; Lawrence claimed that he was trying to lose weight to fit more comfortably into his character's "fat suit." ~ Mark Deming, Rovi

Cedric the Entertainer
as Reverend

Edwin Hodge
as Basketball Teen No. 1

Aldis Hodge
as Basketball Teen No. 2

Louis Archie Shackles
as Choir No. 1

Tameka Holmes
as Choir No. 2

Ellis Hall
as Organist
View All

The whole project works so hard at creating funny situations that Lawrence gets no chance to be funny as himself.

[Big Momma] is about as old as her pantyhose.

Big Momma's House is much like the baseball games we've been seeing at Enron Field lately -- a lot of action with poor results.

You may find yourself waiting for a commercial break. Sadly, it never comes.

Big Momma ... manages to pull off a fairly miraculous stunt -- she turns Martin Lawrence into a sweetie-pie.

Big Momma's House seldom finds anything funny for Lawrence to do in drag.

Lawrence isn't doing anything that hasn't been done before, and he's certainly not doing it any better.

Idiotic "comedy" is larded with thick makeup and thin performances.

squarely aimed at the type of audience willing to overlook all sorts of inconsistencies and stereotypes in a movie as long as it includes a few juicy toilet jokes.

Martin Lawrence is hysterical throughout, but the film does no good with just him carrying the load. Big Momma's House is plain and simple and nothing too spectacular or even hysterical. 3.5/5

A painfully stupid comedy starring Martin Lawrence, Big Momma's House is one of those comedies that fails to deliver on good comedy, and opts to deliver a stupid formula of tasteless humor for the viewer. The film is awful with a poorly written script, poor cast and poor directing. Big Momma's House is a laugh free comedy that tries too hard at making you laugh with its stupid attempt at humor, which doesn't pay off. The use of comedy here is strained, and the filmmakers clearly don't know how to create effective on-screen jokes. For that this film fails. The film is definitely not worth your time as there's nothing memorable or good about this film. The film is a poorly constructed comedy that delivers stupid, painful humor that just doesn't work. Add to that a cast that clearly don't know what they're doing, and you have a horrible comedy on your hands. Martin Lawrence has made some bad films in the past, but Big Momma's House is one of his worst. This is a film that really doesn't have any originality to it, and it's a painful experience to watch. I hated this film, and it is one of the worst comedies that I have seen. Skip this film, as there is nothing funny about this film. The film is just another run of the mill laugh free comedy with a bad cast. Watch something better. If you're looking for something funny and memorable, you won't find it here. This film was horrible, and definitely not worth your time.

This movie is one bad joke stretched out to an hour and a bit. Lawrence im pretty sure you can do better, dont listen to Eddie Murphy!

Good & fresh idea but it gets real old real fast.