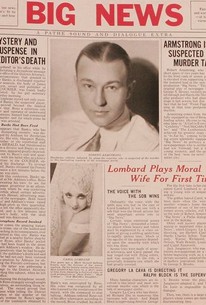 A primitive early talkie from Pathé, this crime drama starred relative newcomers Robert Armstrong and Carole Lombard, the latter still spelling her first name Carol. They play husband and wife, she threatening divorce unless he devotes more of his time to their marriage. In reality, Armstrong is an undercover detective busy investigating a dope ring lead by Reno (Sam Hardy), a crook with friends in high places. When Armstrong gets too close to the truth, Reno has him framed in the murder of corrupt newspaper publisher Addison (Charles Sellon). A Dictaphone recording Addison was making when he was murdered ultimately exonerates Banks, who can now return to his forgiving wife. Both Robert Armstrong and Carole Lombard would see their careers soar in the 1930s, he as the nominal star of King Kong (1933), she as one of Hollywood's best light comediennes. In fact, director Gregory La Cava and Lombard would collaborate again on My Man Godfrey (1936), one of the era's best screwball comedies and a far cry from the pedestrian Big News.

Vernon Steele
as A Reporter

Clarence Wilson
as Coroner
View All

There are no critic reviews yet for Big News. Keep checking Rotten Tomatoes for updates!

There are no featured reviews for Big News at this time.