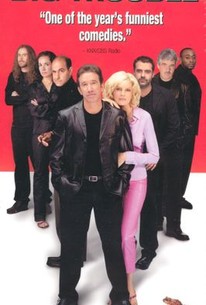 Barry Sonnenfeld directs this kissing cousin of his own 1995 hit Get Shorty, a comic caper adapted by Robert Ramsey and Matthew Stone from the novel by newspaper humorist Dave Barry. When two New Jersey hitmen (Dennis Farina and Jack Kehler) show up in Miami to whack crooked businessman Arthur Herk (Stanley Tucci), they happen to creep into his backyard at the same time as Matt (Ben Foster), a high school kid with his own assassination plans. Only, Matt plans to use nothing heavier than a squirt gun on Jenny (Zooey Deschanel), Arthur's daughter, as part of a school-wide game of "killer." When the plans collide, mayhem ensues, and Matt's struggling ex-columnist dad (Tim Allen, loosely modeled on Barry), Arthur's bored wife (Rene Russo), and two confused police officers (Janeane Garofalo and Patrick Warburton) are also called to the scene. Shift to the next day and there's more craziness to follow. Two dimwitted petty criminals (Tom Sizemore and Johnny Knoxville) choose the exact moment Arthur is transacting a nuclear arms deal to hold up the dive bar where they're regulars, which is actually a front for the Russian mob. Soon the whole motley cast -- including an agreeable drifter (Jason Lee), a buxom maid (Sofia Vergara), and a pair of ruthless FBI agents (Heavy D and Omar Epps) -- are caught up in a hostage scenario in which the weapon accidentally gets brought aboard a hijacked plan.

Jay Rasumny
as Courier No. 1

Ruben Gomez
as Courier No. 2

Selma Cipes
as Retiree No. 1

Sid Raymond
as Retiree No. 2

Jody Wilson
as Retiree No. 3

Maurice Alevy
as Retiree No. 4

Sharp, funny movie for high schoolers and up.

In this clumsy attempt to merge farce with satire, the jokes repeatedly miss the mark.

Because the tone is so light, so genial and eager to please, the whole enterprise seems the opposite of prescient. It seems naive, almost delusional.

Faithful to the events in Barry's novel, lifts a good deal of his witty dialogue, and recruits a proven cast of laugh-winners. Why, then, is it so resolutely unfunny?

The worst thing someone could say about "Big Trouble" is that it's too much like "Get Shorty," which is one of the best reasons to go see the film

Sprawling comedy has a few laughs in it -- and the specter of recent events hanging over it.

...a highly enjoyable romp that is as multi-faceted as it is tightly constructed.

Big Trouble is one of those great big silly capers that fails at juggling its dark humor while feeling cutesy in its ability to dance around the plot contrivances...derivative, offensive, stylish and smirky crime caper.

A great line up of talent and Dave Barry's story about shenanigans in the U.S. capital of the Third World and yet ... fizzle, a firecracker that doesn't go off. Sonnenfield explains in the extras section that no one really committed, and that it rained a lot. Eh.

It was wild and crazy. Pretty funny but did get a little boring too.

I liked it and thought the comedy was fresh and smart. The cast worked great and even some of the smaller parts were excellent.