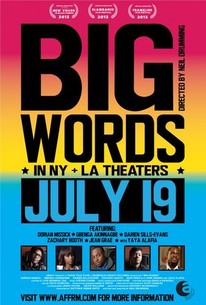 Set in Brooklyn on the eve of Obama's history-making election, three former members of a promising hip-hop crew cross paths again to discover that some things never change. Former frontman John, once known as Big Words, is now a working class guy who raps only to himself. James is a publicist living with his boyfriend, far removed from the days when he rhymed about getting girls. While DJ Malik still spins records with a longing for the glory days. Together again on the day of a landmark election, the friends reckon with dreams diferred and new hopes. (c) Official Site

Amir Arison
as Eddie
View All

Neil Drumming's Big Words is an engaging, entertaining and clever film about passion and nostalgia

Drumming is able to swing from lighter comedic moments to dramatic insights while making it seem effortless.

Full of ideas on art, politics, relationships, and the construction of identity, it's that rare film in which black characters aren't amped-up caricatures.

While not perfect, its restrained approach makes for ideal counter-programming in which message-mongering takes backseat.

However, what's more impressive is how "Big Words" slips in major ideas about middle age, work, race, and gender politics into its narrative with ease.

The nuances and layers the actors bring to these complicated, all too real characters and dynamics between them speak far more loudly than any written or spoken word, no matter how big.

A poignant portrait of a very eventful day in the lives of a trio of African-Americans too self-absorbed to care about the fact that Barack Obama was about to win the Presidential Election that night.

There are no featured audience reviews yet. Click the link below to see what others say about Big Words!