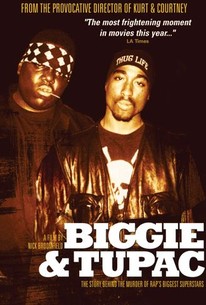 Critics Consensus: This is a compelling documentary, even for those who aren't fans of rap.

Critics Consensus: This is a compelling documentary, even for those who aren't fans of rap.

Critic Consensus: This is a compelling documentary, even for those who aren't fans of rap.

When rapper Notorious B.I.G. (aka Biggie Smalls) died in a hail of bullets outside the Soul Train Music Awards in Los Angeles in March of 1997, it appeared to be the latest salvo in the East Coast/West Coast rap/gang rivalry that had claimed the life of Tupac Shakur six months earlier in Las Vegas. Three years later, however, Los Angeles police Detective Russell Poole, who had been assigned to the Smalls case, went public with a startling accusation: the LAPD's top brass derailed the investigation when Poole began uncovering evidence that tied fellow LAPD officer David Mack to the rap star's murder. What if one of L.A.'s most infamous unsolved homicides involved a cop? Might it furthermore be connected to the city's unfolding Rampart scandal -the worst in LAPD history? Through a series of interviews as well as newly unveiled evidence, the film reveals some shocking details about the still unsolved murder of two of the biggest stars in rap.

Nick Broomfield
as Himself

Notorious B.I.G.
as Himself

Critic Reviews for Biggie and Tupac

Short on concrete evidence but long on compelling insinuation.

Compulsively watchable and endlessly inventive as it transforms Broomfield's limited materials into a compelling argument.

You don't need to know your Ice-T's from your Cool-J's to realize that as far as these shootings are concerned, something is rotten in the state of California.

Broomfield turns his distinctive 'blundering' style into something that could really help clear up the case.

Broomfield's style of journalism is hardly journalism at all, and even those with an avid interest in the subject will grow impatient.

Most of the information has already appeared in one forum or another and, no matter how Broomfield dresses it up, it tends to speculation, conspiracy theories or, at best, circumstantial evidence.

In the film's final third there is an interview with Suge Knight, head honcho at Death Row Records. Knight was in prison at the time, but through sheer persistence Broomfield got him on camera. You can sense the tension in the sequence.

Rife with unsupported allegations and thoroughly dubious sources, Biggie and Tupac magnifies a few molehills of truth into a mountain range of rumour, speculation and lies.

An engrossing and rather suspenseful mystery investigation.

Whether you like rap music or loathe it, you can't deny either the tragic loss of two young men in the prime of their talent or the power of this movie.

Weirdly, Broomfield has compelling new material but he doesn't unveil it until the end, after endless scenes of him wheedling reluctant witnesses and pointing his camera through the smeared windshield of his rental car.

Audience Reviews for Biggie and Tupac

A great discussion brought forward by the film makers from those who knew the rappers well on the potential conspiracy behind their deaths.

From the same documentarian that brought you Heidi Fleiss: Hollywood Madam and Kurt & Courtney, comes our favorite conspiracy theorist with some interesting theories and oft-repeated questions about the murders of famous rappers Tupac Shakur and Biggie Smalls. Though Broomfield's films definitely have a low quality feel to them, the man also presses issues and asks the uncomfortable questions most people would be afraid to ask if they actually got to face the people who could give them those answers. This man travels into Biggie's and Tupac's childhood neighborhoods with no protection to ask their friends what they were like, what their opinions of the murders were, and even goes to prison to visit Suge Knight himself. Knight even references the Heidi Fleiss documentary, demanding that he not be made a fool like she was. Broomfield brings up an interesting theory: was Tupac murdered by his father figure Suge Knight because he wanted to leave Death Row Records? And did Knight have Biggie murdered to make their deaths look connected? Though only a handful of people agree with/confirm his theory, Broomfield makes a VERY convincing argument that keeps you hooked and helps you overlook the grainy look of his film.