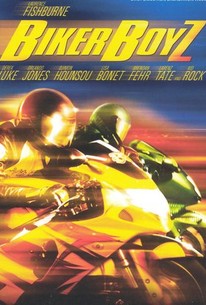 Critics Consensus: Waste of a good cast. For a movie about bike racing, it never gets up to speed.

Critics Consensus: Waste of a good cast. For a movie about bike racing, it never gets up to speed.

Critic Consensus: Waste of a good cast. For a movie about bike racing, it never gets up to speed.

Two generations of radical bikers face off in this rubber-burning action drama. Manuel "Smoke" Galloway (Laurence Fishburne) is the leader of the Black Knights, an underground motorcycle club. Smoke, like most of his fellow Knights, is a successful white collar worker who can afford fancy leathers and top quality bikes, and Smoke has earned a reputation as the "King of Cali," willing take on anyone in a drag race, legal or no. Kid (Derek Luke) is a gifted young rider whose father was once Smoke's mechanic; when Kid's dad died after an accident, Kid set out to become the best biker he could be to carry on his father's name and reputation. Smoke, however, has no room in the Black Knights for Kid, and so he and several fellow outcast riders start their own club, the Biker Boyz, and challenge Smoke to prove once and for all who is the fastest rider on the scene. Biker Boyz also features appearances from Orlando Jones, Lisa Bonet, Djimon Hounsou, Larenz Tate, and Kid Rock.

Eriq La Salle
as Slick Will

Salli Richardson-Whitfield
as Half & Half

David Boyd
as Prospect No. 2

The dialogue is almost as loud as the exhausts; and the bits of detail aren't enough in a movie that teens may find delivers an unpalatable message -- daddy knows best.

A dull soap with a baffling paucity of thrills.

Isn't really good enough to hold your attention but at least doesn't abuse it too badly in the fleeting moments that it does.

At times it feels as though there are more subplots and one-shot minor characters in the mix than bikes on the screen.

Guy flicks can be just as galling as the chick variety.

Basically this is a cheap rip-off of The Fast and the Furious, with fewer thrills, fewer spills, and two fewer wheels.

At times entertaining, but never boring. It sure could have been a lot worse.

... Director Reggie Rock Bythewood assures us of two things beyond all doubt: motorcycles are really loud and really fast.

Unless you're willing to wade through a ton of offal to see some cool bikes, you're better off at the Honda showroom.

Good movie. This movie only have a little sad parts. The music is good.

Feeble rip-off of The Fast And The Furious with motorbikes. It's true that TFATF was also dim-witted, contrived and loaded with cliches, but at least it did it with visual flair. This is just a waste of time.

Not your average biker flick...Lawrence Fishburne once again delivers a believeable performance dispite the odds set up against him. Truly one of his most memorable performance since "Boyz 'N the Hood".

not worth getting revved up over.