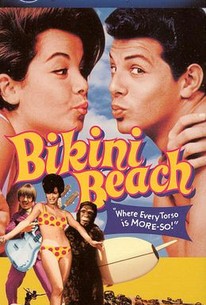 The third entry in the Beach Party series finds Frankie Avalon playing not only the usual teen surfer role, but also that of a British rock star named Potato Bug. Unfortunately for heart-throb Frankie, charming Potato Bug takes a great interest in Dee Dee (Annette Funicello) and it looks as if Frankie might lose her attentions. Meanwhile, the beach gang is threatened by Harvey Huntington Honeywagon (Keenan Wynn) who plans to build a resort for seniors on their beach. Helping to intimidate the teens is Harvey's partner Eric Von Zipper (Harvey Lembeck)--a leathered biker flanked by a gang of dim-witted bullies. The teens find adult support from Big Drag (Don Rickles) when they try to defend their beach as Harvey is distracted by an admiring schoolteacher (Martha Hyer). Added musical entertainment is provided by "Little Stevie Wonder," The Pyramids, and The Exciters Band. Character actress Renee Riano and Boris Karloff both make uncredited appearances.

Frank Alesia
as Surfer
View All

A horrible juvenile comedy in which surfers fight cyclists and convert their elders to the pleasures of the bronzed physique.

If the first two Beach Party movies were anything goes, Bikini Beach is everything goes.

In an acting stretch, Frankie Avalon here plays both his usual surfing namesake and a vacationing mop-top English singer named the Potato Bug (the sort of British invader that sank Avalon's recording career)...

There's lotsa blondie beach babes shaking they groove thang here (and lotsa times when the camera just sorta slowly meanders down thataway to show you lest you forgot) ... and thankfully too, cause this ain't got much anything better in this mid-1960's style teen exploitation go round.

This "Beach" movie has the worst plot of the series. It's still some fun to watch, but it's predictable and stupid, and my least favourite of the movies.