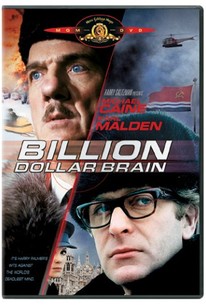 Harry Palmer (Michael Caine), the reluctant secret agent from The Ipcress File (1965) and Funeral in Berlin (1966) -- both (like the source for this movie) based on novels by Len Deighton -- is back again in Ken Russell's Billion Dollar Brain. Having left Britain's espionage service, Palmer is scraping out a living as a private investigator, but he's still willing to give his old boss Colonel Ross (Guy Doleman) the bum's rush out of his office when he comes calling, offering a raise and promotion if he'll return. But Palmer ends up working for Her Majesty's government anyway -- a letter arrives, with a key and money, and telephoned instructions by a mechanical voice connect him up with a carefully sealed parcel (filled with what an x-ray reveals as eggs) that he must transport to Helsinki. No sooner does he get there than he discovers that an old friend, Leo Newbigin (Karl Malden), and his young lover Anya (Françoise Dorléac) are behind the trip, and that the man who was supposed to receive the parcel is dead. The eggs contain dangerous viruses stolen from a secret British laboratory, and England wants them back and wants to know why they were stolen. That assignment immerses Palmer in a deadly game of deception, double-dealing, and triple-crosses on all sides, as he finds that Leo is working for a privately operated intelligence network, set up by a rabidly right-wing Texas oil man, General Midwinter (Ed Begley Sr.). The billion-dollar super-computer of the title, built by Midwinter, runs a network of spies and assassins aimed at the destruction of the Soviet Union. That interests Palmer's old friend, Soviet security chief Colonel Stok (Oskar Homolka, in an almost movie-stealing performance), very much, and he, too, wants to know what Palmer knows. And then there's Leo, who has taken millions from Midwinter, supposedly to establish a secret underground in Latvia, waiting for the signal to rise up against the Soviets occupying their country that will spread across the Baltics and beyond and bring down the Soviet government. He's taken the money, but all Harry find when he goes into Latvia is motley bunch of broken-down black marketeers whose orders are to kill him and make it look like the work of the Soviets. And there's Anya, who is sleeping with Leo, trying to seduce Harry, and seems to have an agenda all her own, but in whose interest? If it's all a little confusing, so was the book on which it was based, but there's enough striking visual material, courtesy of cinematographer Billy Williams, and engrossing performances (and a wry sensibility), courtesy of director Ken Russell and screenwriter John McGrath, that the leaps in plot, logic, and setting don't matter that much, and it is great fun. ~ Bruce Eder, Rovi

Susan George
as Schoolgirl on train

It is a spy movie that commits the unforgivable sin of losing track of its plot.

Scrambled technique has the effect of a series of evasive mannerisms, to keep anyone from meeting the story head-on.

A clever, brisk, entertaining spy picture that has a lot more Ken Russell in it than you might suspect.

It's far-fetched, but it's fun.

Russell attempts to lampoon the spy genre by turning a Harry Palmer (the anti James Bond) film into a James Bond movie. It has all the subversiveness of a Ken Russell film so his fans will probably enjoy the outing, but fans of the first two films (such as myself) will be somewhat disappointed. Michael Caine's characterization of Harry is spot on as always.

Enjoyable if dated, they are still using punch cards to program their computers!, espionage thriller with a solid cast. Caine is cool as ice as the reluctant protagonist casting a jaundiced eye on all the shenanigans going on around him. Francoise Dorleac is a lovely mystery woman although her character seems to vanish at several key points in the film when it feels like she would be there. This might be because she was killed in a traffic accident while the picture was still filming necessitating a rethinking to still make her completed work usable. She's quite magnetic, her resemblance to her sister Catherine Deneuve is striking, and her death cut short a career that was already very successful in France and was starting to expand worldwide. Ed Begley also stands out, having a great time as a crazy old coot. Subtle he ain't but memorable for sure.

The most ambitious and fanciful of the original trio of Harry Palmer films, this might easily be confused with a James Bond movie. Caine is as good as ever but the down-to-earth Palmer seems to have ascended to a level that his prevoius incarnations would have been uncomfortable with. Cast and locations are excellent.

A substandard Bond clone tackily directed by amateurish hack Ken Russell. The plot is meandering and its overlong, but on the plus side it features Caine at his youthful peak and some handsome snow covered Finnish locations.