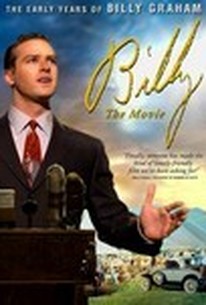 Most of us know Billy Graham as the self-assured and charismatic preacher who became perhaps the most famous evangelist of the 20th century. But who was he really? In this entertaining biopic, we meet an earnest and promising young high school student at the crossroads of faith and doubt and follow him through his first major crusade in Los Angeles in 1949. The story is told in flashback through the eyes of Charles Templeton, a gifted preacher and mentor from Graham's early days who eventually rejects God. Friction develops between the two as Graham struggles with his friend's wavering faith, while his own flourishes and as he goes on to launch one of history's most powerful evangelistic ministries.

There are no critic reviews yet for Billy. Keep checking Rotten Tomatoes for updates!

There are no featured reviews for Billy at this time.