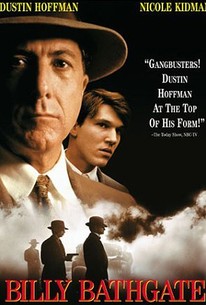 In this film version of E. L. Doctorow's Billy Bathgate, Loren Dean plays the title character, a street-smart kid who inveigles his way into the confidence of 1930s gangster Dutch Schultz (Dustin Hoffman). Billy is ordered to look after Schultz' new moll, Drew Preston (Nicole Kidman), while Dutch fends off tax evasion charges and such up-and-coming rivals as Lucky Luciano (Stanley Tucci). Even though they know they're playing with dynamite, Billy and Drew fall in love. In attempting to escape Schultz' wrath, Billy succeeds only in putting himself in the thick of a gun battle between his boss and Luciano. When "Charley Lucky" emerges triumphant, Billy is forced once again to rely on his wits to escape being sent to the bottom of the briny in a cement overcoat. Bruce Willis shows up in an extended cameo as Dutch Schultz' former business associate. Billy Bathgate was adapted for the screen by British playwright Tom Stoppard.

Kas Self
as Woman at Bake Sale

Frank McLean
as Newsboy
View All

Despite Dean's alert, open performance, Billy remains an opaque witness to events that are unfolding over his head. Hoffman's performance also is problematic.

Despite a Tom Stoppard script and diligent direction, EL Doctorow's novel about a youngster's experience of the life and times of Dutch Schultz seldom takes off as a movie.

Billy Bathgate isn't an embarrassment, but it's a puzzle. Watching it, you can't locate the passion that drew the filmmakers to it in the first place.

The story sounds promising, yet there's a joyless, dutiful air to everything that happens.

Despite the shaggy dog sense of fun, Bathgate fades before you've left your seat.

Uninspired but intriguing gangster flick with fine work from Hoffman and Kidman.

Who got rich off this film, because looking at it unbiased, you'd think that it cost $12m, not $70m.

Billy Bathgate cost a lot of money to make, they say, but it's not there on the screen.

All of the leads here -- especially Hoffman, big surprise there -- are top notch and thoroughly believable in their roles. Unfortunately, it seems no one thought out just what their roles should be.

Billy Bathgate should be much more exciting and gritty than it is. The story of Dutch Schultz and his decline offers a wealth of material for Hollywood to make a competent gangster film. Instead, Billy Bathgate focuses more on Schultz's protege, and his brief love interest in Nicole Kidman. This succeeds in making the movie boring at times.That said, Dustin Hoffman was excellent as Schultz, and Bruce Willis was effective as well, though ultimately wasted. Hoffman and the excellent world building, the most realistic depiction of 1930s New York I've seen, are why I ultimately enjoyed it, despite its' prominent flaws.

I don't remember too much about it now but my lingering impression is that it was better than I expected for yet another gangster yarn, plus there's always bonus points for Nicole Kidman skinnydipping.

A strangely unfulfilling gangster movie. One would expect a greater film considering the all star cast.

Little known gangster film similar in ways to Casino, Goodfellas set in the 1930's. Has a strong cast including Bruce Willis and Nicole Kidman.