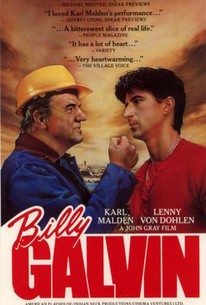 Lenny Von Dohlen plays Billy Galvin, the son of a no-nonsense construction worker (Karl Malden). Though his dad insists that he go to college to become an architect, Billy would rather go into his father's line of work. To prevent this, dad pulls strings to keep Billy out of the ironworker's union. His bullheadedness inevitably leads to ill-will and emotional disaster. Produced for PBS' American Playhouse TV series, Billy Galvin was afforded a very brief theatrical run.

There are no critic reviews yet for Billy Galvin. Keep checking Rotten Tomatoes for updates!

There are no featured reviews for Billy Galvin at this time.