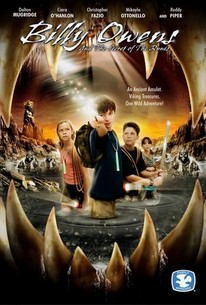 Their teacher's soul imprisoned in a powerful amulet, a group of young wizards led by Billy Owens (Dalton Mugridge) embark on a noble quest to rescue the man who taught them the magical arts, and prevent a malevolent, rival wizard from using the ancient charm to gain unlimited wealth and power. ~ Jason Buchanan, Rovi

Jordan Goulet
as Kurt
View All

Critic Reviews for Billy Owens and the Secret of the Runes

Poorly made Harry Potter wannabe is boring and awful.

Audience Reviews for Billy Owens and the Secret of the Runes

Sometimes B-movie studios want to capitalize on a successful film franchises, and do so by making similar, low budget versions of these films. The DVD release of Snakes On A Plane was accompanied by Snakes On A Train. Every time a Transformers movie comes out, it is joined by a direct-to-video film called Transmorphers. Billy Owens is the B-movie comparison to Harry Potter and as far as the films go, they don't match up very well. In the first Billy Owens film, the budget was very low, the special effects bordered on laughable, and the acting was terrible, but the story was actually really good. As I watched the second film, little has changed. The story was still terrific and would make for a tremendous book series, but the film, just doesn't cut it. In The Secret of The Runes, we see less of the ridiculously bad special effects, but the acting doesn't get much better. The lead, Dalton Mugridge, is really the only actor who shows a marked improvement and does a much better job in the second film than he did in the first. As for the other kids, they are just terrible, and don't get me started on their master wizard, "Rowdy" Roddy Piper. If this wasn't just a simple companion playing off Harry Potter to get viewers, if someone had actually put some money into these stories, these films would have been really good! The writing is terrific and it's the only reason I had any interest in these films at all. When you take the story, add a bunch of newcomers, and combine them with a former pro-wrestler, and special effects that look like they were made on a Windows '95 PC, the result is a film with a great story that is virtually unwatchable. Maybe if this film were made in the early 80s, when people were used to awful effects and bad acting, it would have been successful, but in the computer age, Billy Owens is sadly obsolete.

Billy Owens and the Secret of the Runes Quotes