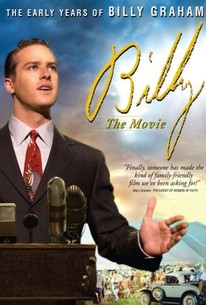 Most of us know Billy Graham as the self-assured and charismatic preacher who became one of the most important figures of 20th Century Christianity. Now, with the release of Billy: The Early Years, we meet Billy as the earnest and promising young man at the crossroads of faith and doubt, ultimately facing the moment of decision that launched one of history's most powerful evangelistic careers. Most compellingly, "Billy: The Early Years" paints its portrait of Graham against the backdrop of his relationship with Charles Templeton, another gifted young preacher who's faith could not withstand the onslaught of scientific skepticism. He and Graham parted ways and in the film, Templeton comes to personify the rising tide of disbelief into which Graham launched his crusades.

That's the real shortcoming here. A bland leading man in a movie without much of a biographical spark to it makes for a dull sermon indeed.

...a biography picture of the patronizing saint variety.

Hammer does a credible Graham impression, but if the script isn't up to snuff, none of the other stuff matters. And this particular screenplay is nowhere close to that.

There are no featured audience reviews yet. Click the link below to see what others say about Billy: The Early Years!