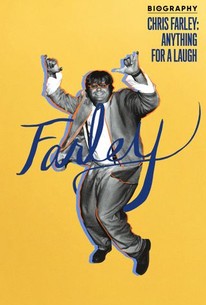 In his all-too-brief career, Chris Farley connected viscerally with audiences, creating hilarious characters that have stood the test of time. Beginning in the Midwest, Farley moved his way through the Chicago improv and sketch comedy scene at IO and Second City. He broke through as a cast member of Saturday Night Live and later starred in several iconic big screen comedies. However, behind the over-the-top stage presence were insecurities that were deeply tied to his addictive personality.

Critic Reviews for Biography: Chris Farley - Anything for a Laugh

...a soothing reminder of how comedy has the innate ability to help people connect with one another.

There are no featured reviews for Biography: Chris Farley - Anything for a Laugh at this time.

Biography: Chris Farley - Anything for a Laugh Quotes