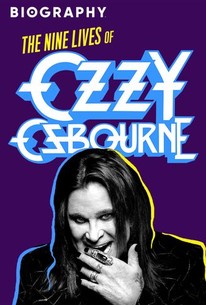 "Biography: The Nine Lives of Ozzy Osbourne" traces Ozzy's life from his childhood in poverty and time in prison, to fronting legendary Rock and Roll Hall of Fame inductees Black Sabbath and successful Grammy Award-winning solo career, to one of rock's elder statesmen and a loveable 21st century television dad. The two-hour documentary explores how Ozzy has continually reinvented himself and his career to propel himself toward greater success. As Ozzy turns 70, he reflects on the intimate details of his successes, failures, and his unique ability for survival and perseverance--including never-before-seen interviews about his recent Parkinson's diagnosis.

Critic Reviews for Biography: The Nine Lives of Ozzy Osbourne

That willingness to be vulnerable displayed in "Nine Lives" makes it an essential watch for fans of the musician, also serves to illuminate Ozzy and Sharon's shift in the early 2000s to television.

There's no new revelations in The Nine Lives Of Ozzy Osbourne, no deeper examination of his life or artistry, but his charm and common touch are enough to keep you watching.

There are no featured reviews for Biography: The Nine Lives of Ozzy Osbourne at this time.