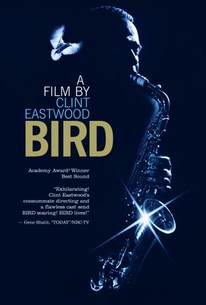 Critics Consensus: Forest Whitaker inhabits Charlie Parker with aplomb in this moving love letter to the music icon, told by director Clint Eastwood with a moody style that visually evokes the wistful rhythm of jazz.

Critics Consensus: Forest Whitaker inhabits Charlie Parker with aplomb in this moving love letter to the music icon, told by director Clint Eastwood with a moody style that visually evokes the wistful rhythm of jazz.

Critic Consensus: Forest Whitaker inhabits Charlie Parker with aplomb in this moving love letter to the music icon, told by director Clint Eastwood with a moody style that visually evokes the wistful rhythm of jazz.

Academy Award-winning director Clint Eastwood ("Letters from Iwo Jima," "Flags of Our Fathers"), a well-known, long-standing jazz aficionado, delivers a compassionate portrait of jazz visionary Charlie "Yardbird" Parker. Eastwood, who won a Golden Globe for Best Director for this film, also paints a vivid portrait of the jazz world in all its complexity. Academy Award, Golden Globe and Emmy Award-winner Forest Whitaker ("The Last King of Scotland," "Phone Booth"), as Parker, provides a multifaceted performance that helps provide an understanding of the man's genius, and tragedy. Co-starring Diane Venora ("The Insider," "Heat"), who along with Whitaker was nominated for a Golden Globe for her performance in this picture, Bill Cobbs ("Night at the Museum," "The Hudsucker Proxy"), John Witherspoon (the "Friday" movie series, TV's "The Wayans Bros.") and Tony Cox ("Bad Santa," "Epic Movie"). This music-driven film was an Academy Award-winner for Best Sound.

George Orrison
as Patient with Checkers

Richard Zavaglia
as Ralph the Narc

Charley Lang
as DJ at the Paramount

Don Starr
as Doctor at Nica's

What the film pulls off is the difficult fusion of this kind of accuracy with larger 'truths' which are no respecter of accuracy.

In this movie and its hot, fast bursts of bop, Charlie Parker gets a fitting elegy.

Sensitively acted, beautifully planned visually and dynamite musically, this is a dramatic telling of the troubled life of a revolutionary artist.

Bird is less moving as a character study than it is as a tribute and as a labor of love. The portrait it offers, though hazy at times, is one Charlie Parker's admirers will recognize.

Even though, thematically, the movie won't come clear, Eastwood has succeeded so thoroughly in communicating his love of his subject, and there's such vitality in the performances, that we walk out elated, juiced on the actors and the music.

People who don't like jazz often complain it's overlong, complicated, noodling, and meandering. These criticisms can all be leveled at director Clint Eastwood's Bird, who, unlike a jazz master, doesn't back up his work with any inventive flair.

It is only thanks to Whitaker's performance, which won him a Golden Globe, that we are truly able to bond with Bird and truly care about his lifelong challenges.

Eastwood directed Bird in much the same way he plays jazz piano-not with caution, not with precision, but with a love that is supreme.

"Bird'' is a movie that demands your full attention, refusing to yield all its meanings if you sit back and let it wash over you.

Eastwood shows a Parker that is haunted by his boyhood addiction, and shows off the innumerable people who loved his talent who were let down by him time and again.

This is the biopic of jazz legend Bird Parker. Forest Whitaker gives a tour de force performance in the titular role of this biopic. It's a complicated role for Whitaker, filled with moments when he battles segregation with strategic charm and other moments when he's so strung out that I found it difficult to sympathize with him. Whitaker handles all the acting challenges with the poise of a seasoned vet. Clint Eastwood's direction captures the feel of jazz. Smoky nightclubs, some quick dialogue, and an ever-present brassy score bring back the environment of the time with a bygone verisimilitude. While the narrative structure - telling the middle of the story at the beginning - works toward the start of the film, it falls apart halfway through. Also, Diane Venora can't keep up with Whitaker, and the reasons why Chan loves him become less and less clear. Overall, you should see this film because of Whitaker, and if you like the music of the era, you're in for a real treat.

an expertly crafted film. the direction and acting were flawless, and the music was obviously exceptional. my real criticism of the film lies in the choices made in the writing. it seems the film was dominated by parkers personal life rather than his music, and more balance was probably appropriate, and even with the focus as presented there were a few major pieces of parkers life not included in the film that really should have been. overall, an incomplete look at bird despite the films lengthy running time, but what we were given was made with precision and the film was a joy to watch.

A biopic on Charlie "Bird" Parker, Clint Eastwood crafts this film as a labor of love. His love for Jazz music is apparent with this film, and its a well told and acted biopic. Clint Eastwood has tremendous flair in telling a great story, and he tells Charlie Parker's story with knowledge on the subject matter at hand. The film is dark and sad. Parker lived a sad life and this is what unfolds on the film. Bird is a terrific biopic on a tremendously talented musician. This is one of the best biopics I've seen seen. As a diehard fan of Heavy Metal and rock music, I thoroughly enjoyed something different such as a film about a Jazz musician. If you want a terrificbiopic on a tremendous musician, then Bird is for you.

Couldn't get into it.