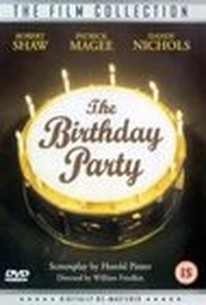 Harold Pinter's theatrical piece The Birthday Party was committed to celluloid in 1968 by future Exorcist director William Friedkin. Robert Shaw plays a boarder in a sleazy British seaside-resort rooming house. The landlady (Dandy Nichols) holds a cheerless birthday party for Shaw, which is invaded by a couple of shady characters named Goldberg (Sidney Tafler) and McCann (Patrick Magee). No one knows why they're there except for Shaw, who after being repeatedly humiliated by the despicable duo is taken away by them to parts unknown. The Birthday Party ends with 30 seconds of a totally blank screen. ~ Hal Erickson, Rovi

Critic Reviews for The Birthday Party

It probably wasn't possible to make a satisfactory film of The Birthday Party. On the other hand, it's impossible to imagine a better film of Pinter's play than this sensitive, disturbing version directed by William Friedkin.

I couldn't resist its strangeness.

Audience Reviews for The Birthday Party

"The Birthday Party" starts with Meg(Dandy Nichols) making a delicious looking breakfast of fried bread and corn flakes for her husband Pete(Moultrie Kelsall) who announces that a couple of men are interested in renting a room at their boarding house. Their only other tenant is Stanley(Robert Shaw) who has been living there for about a year. Enter McCann(Patrick Magee) and Goldberg(Sydney Tafler). Ordinarily, I would complain when a movie like "The Birthday Party" does not expand on its stage origins, in this case from a play by Harold Pinter(who also wrote the screenplay) first produced in 1957, but here William Friedkin's claustrophobic direction works wonders in its mind games that play on the very nature of identity and could have also served as an influence on "The Prisoner." Of special interest are the funky visual effects used in the film's climax. And even as disheveled as he is in torn pyjamas, balding and overweight, Robert Shaw is still a force to be reckoned with. My only major complaint is that this movie could have been much more tightly edited, especially in the end.