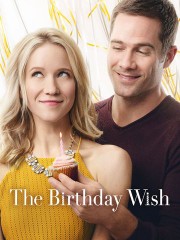 Des S
April 10, 2017
This wasn't the best Hallmark movie, but it was an enjoyable idea for a movie.

This is the first Hallmark film I'm watching after the end of the winter. When it is the Christmas season, I always go for the Hallmark films, but I got interested on this after learning about the plot. If you are very familiar with Hallmark films, you will know what to expect and how to enjoy them. I totally got entertained. This story is obviously not fresh, but refreshed with the great characters.

Gwen is who just tuned 30, was expecting the marriage proposal from her boyfriend, but nothing happened. She's an ad filmmaker, as her focus slipping away from the duty for not getting married, then she meets a new workmate, whose their initial impression does not go well. But later they start to have feelings for each other. If that's true how they are going make it real was revealed in the rest of the film.

Some of the lines were very nice. Well executed utilising fine cast and locations. Jessy Schram was simply amazing and also the plus point of the film. The rest of them were not bad either. Since it is a television film, it did not go past the 90 minute mark. That means well paced narration with the well developed storyline. I think it will work better for family audiences. But I suggest it for everyone, if they watch it with low expectation. Surely worth a try, particularly in a date night.

Nick S
January 24, 2017
An autistic self indulgent mix of a stand-up comedy, Charlie Chaplin mimic and a teenager romance (with two 40 years old as teenagers). To make it more sparkly they added scenes like "chomping on a soya sandwich like piggies" and "slippery-look I've hurt myself" by him jumping in the air in front of his wannabe girlfriend and landing smack on his arse on frozen concrete pavement.
The Hallmark Channel made a few months ago a very nice "The Mistletoe Promise" with the same Luke MacFarlane in the lead role; this "The Birthday Wish" is a totally different product; it's boring, irritating and less romantic than a concert of cats in heat.
Page 1 of 1