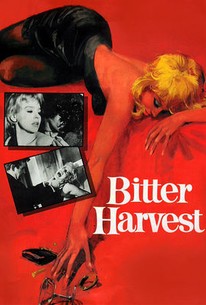 It's Hoppity Goes To Town with sex in this 1963 British version of the old chestnut concerning an innocent country lass who travels to the big city and becomes corrupted, in this film version of Patrick Hamilton's novel The Street Has a Thousand Skies. Janet Munro runs the gamut of emotions as Jennie, a young girl from Wales who, with her girlfriend, is seduced and abandoned by a couple of heartless creeps in London, where she is later befriended by a kindly bartender John Stride. But Jennie snubs the bartender and takes up with a an unfeeling playboy. However, Jennie has gone around the park one time too many and is now torn between going back home or committing suicide. ~ Paul Brenner, Rovi

May Hallatt
as Aunt Sarah

There are no critic reviews yet for Bitter Harvest. Keep checking Rotten Tomatoes for updates!

There are no featured reviews for Bitter Harvest at this time.