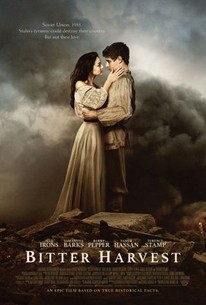 Critics Consensus: Bitter Harvest lives down to its title with a clichéd wartime romance whose clumsy melodrama dishonors the victims of the real-life horrors it uses as a backdrop.

Critics Consensus: Bitter Harvest lives down to its title with a clichéd wartime romance whose clumsy melodrama dishonors the victims of the real-life horrors it uses as a backdrop.

Critic Consensus: Bitter Harvest lives down to its title with a clichéd wartime romance whose clumsy melodrama dishonors the victims of the real-life horrors it uses as a backdrop.

Based on one of the most overlooked tragedies of the 20th Century, BITTER HARVEST is a powerful story of love, honor, rebellion and survival as seen through the eyes of two young lovers caught in the ravages of Joseph Stalin's genocidal policies against Ukraine in the 1930s. As Stalin advances the ambitions of the burgeoning Soviet Union, a young artist named Yuri (Max Irons) battles to survive famine, imprisonment and torture to save his childhood sweetheart Natalka (Samantha Barks) from the "Holodomor," the death-by-starvation program which ultimately killed millions of Ukrainians. Against this tragic backdrop, Yuri escapes from a Soviet prison and joins the anti-Bolshevik resistance movement as he battles to reunite with Natalka and continue the fight for a free Ukraine. Filmed on location in Ukraine, this epic love story brings to light one of the most devastating chapters of modern Europe. The stellar cast also includes Barry Pepper, Tamer Hassan and Terence Stamp. Director George Mendeluk co-wrote the screenplay with Richard Bachynsky-Hoover based on Bachynsky-Hoover's original story . The film is produced by Ian Ihnatowycz, Stuart Baird, George Mendeluk, Chad Barager and Jaye Gazeley. Dennis Davidson, Peter D. Graves and William J. Immerman serve as executive producers. Richard Bachynsky-Hoover is executive producer (Ukraine). Roadside Attractions will release the film in the U.S. on February 24, 2017.

Dylan Williams
as Man On Train

Get Out Is Certified Fresh

Despite the fact that it was a genocide that claimed millions of lives, the Holodomor is not particularly well known. Bitter Harvest is not the film to bring attention to it.

This is a story of villainous oppression, unfortunately told with oppressive earnestness.

It's not Zhivago. The big picture is drawn a little too hastily for that. But it is a rousing tale with political pertinence, given the current state of relations between Russia and the Ukraine.

The Cossack horseback action sequences are impressive, but there are too few shots of thundering hooves and too many scenes of stilted political discourse for this picture to take flight.

Bitter Harvest looks good, but it's a wasted opportunity to tell a story the world should not forget.

Almost inevitably, approaching the Holodomor via a standard-length dramatic feature risks reducing the cataclysm's enormity to a trivializing size and emotional impact.

It's a bad sign when even the prayers in this movie are crappy.

Bitter Harvest is both haunting and engrossing. An emotional powerhouse of a film, it is an emotionally resonant, riveting telling of history. Fear and terror is palpable. Pain is resonant.

Clearly a deeply felt film whose producers' mission is to cast a spotlight on a hidden Ukrainian tragedy, Bitter Harvest has difficulty living up to the powerful tragic sweep of its subject.

At times it felt as if it was trying to emulate David Lean's 1966 masterpiece, Dr Zhivago, although it didn't even come within a whisper of it.

While Mendeluk's film is well intentioned and mildly intriguing, it falls well short of grandness.

A watchable effort that sheds light on the atrocities that happened under Joseph Stalin's rule.

There are no featured audience reviews yet. Click the link below to see what others say about Bitter Harvest!