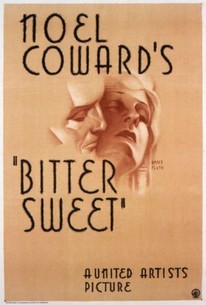 The first of two film versions of Noel Coward's operetta, 1933's Bitter Sweet stars British favorite Anna Neagle and continental star Fernand Graavey (who spelled his name "Gravet" in Hollywood). The wisp of a plot finds Victorian Neagle persuading Graavey to march her to the altar. A brilliant musician, Graavey is unfortunately also a chronic gambler. He is killed in a duel of honor, but his legacy lives on in his music. The already obscure 1933 Bitter Sweet was all but confined to oblivion by Hollywood's 1940 Nelson Eddy/Jeanette MacDonald version. The earlier film was produced and directed by Herbert Wilcox, whose long professional association with his star Anna Neagle culminated in marriage in 1943. ~ Hal Erickson, Rovi

For the definitely imaginative camera work and setting Bitter Sweet marks a real advance on anything yet produced in England.

There are no featured reviews for Bitter Sweet at this time.