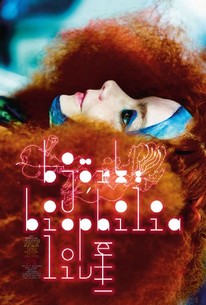 Biophilia live' is a concert film by Nick fenton and Peter strickland that captures the human element of Björk's multi-disciplinary multimedia project: Biophilia. recorded live at Björk's show at london's alexandra palace in 2013, the film features Björk and her band performing every song on 'Biophilia' and more using a broad variety of instruments - some digital, some traditional and some completely unclassifiable. (C) Cinema Purgatorio

To adapt a very old quotation, Biophilia Live asserts that nothing human is foreign to nature.

The film-makers Peter Strickland and Nick Fenton manage to bring a sense of mystery and wonder to what was clearly more than just another gig.

I assume that Björk: Biophilia Live was more thrilling in concert than on film, or else half the audience would have been asleep.

Even if you're not mad about the tunes, the light show and interwoven footage of astral bodies, dancing microbes and pulsing starfish is alone worth the price of admission ...

The Icelandic princess of alt-pop drops an absolute clanger with this "arty" high-concept stage show.

Exactly what those links between music and nature are is not totally clear, but there's an entrancing harmony between what we see and hear.

These 97 minutes will be unlike anything you've seen before - unless you're already a hardcore Bjork fan.

Biophilia proves hugely ambitious and unfortunately unable to avoid falling apart somewhat without the complete story [of its creation].

Time-lapse photography, striking lighting, theatrical intensity and Björk's infectious enthusiasm will make this an irresistible attraction for her many fans.

Bjork's fans will adore this film, which captures the last night of her Biophilia world tour with remarkable artistry and an attention to detail.

Biophilia is not one of my favorite Björk albums, far from it actually, but for the fans out there who love it more than I do this concert film will certainly prove to be a special experience, a psychedelic trip in which her music is interwoven so harmonically with beautiful images.