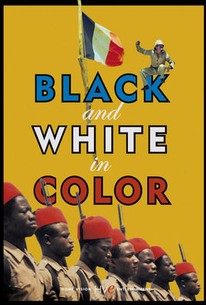 The inaugural film effort of French director Jean-Jacques Annaud, Black and White in Color is set during World War I. Upon the outbreak of hostilities, a French trading post in West Central Africa finds itself at odds with a formerly peaceful German post, for no other reason than their parent countries are at war. The newly xenophobic French traders attack the Germans, only to fail in their efforts. Socialist Jacques Spiesser is put in charge of the debilitated French contingent, utterly discarding his former high ideals in the process. Filmed on location on the Ivory Coast, the satirical Black and White in Color (originally La Victoire en Chantant) won the American Academy Award for Best Foreign Film of 1976. ~ Hal Erickson, Rovi

The movie is far richer than that summary can convey. The climax is a masterpiece of insight into the absurdities of colonialism, war and life in general.

Jean-Jacques Annaud made an impressive directing debut with his WWI-set political tale, which won the 1976 Best Foreign Language Oscar.

biggest chuckles are often reserved for the blundering priests and merchants, as seen by the Ivory Coast natives

The recently release DVD of this film comes with the documentary The Sky Above, The Mud Below. Both were produced by well-respected Swiss producer Arthur Cohn. This was Jean-Jacques Annaud debut feature film. The soundtrack and camera work are well done. But the main attraction is the absurdly comic actions of the French colonists in Africa during the final years of WWI. The French colonists from one village have been friends with German colonists in a neighboring village. Yet, when they see an old newspaper from their homeland announcing the start of WWI, the always drunk sergeant of the colony, the two missionaries, the two brothers who run the general store with their wives, and a couple other colonists, decide to declare war on their German neighbors. The white colonists treat war like a picnic, though, as they expect the African natives to do the fighting and dying for them. A few of the African servants of the colonists make wisecracks about the absurdity of their white "masters," so the movie is not entirely in the voice of the colonists. After several botched attempts at playing war, Hubert Fresnoy (Spiesser), a young scholar, who is against the fighting at the beginning, takes command of the colony and even marries a native woman. He scandalizes the rest of the colonists, but is much more successful at leading the war efforts until a troop of British colonized Indian soldiers arrive to announce the end of the war. It turns out that Hubert and the leader of the German colony are really very similar, and the importance that the various colonists feel about their positions in this "wild" country is totally blown out of proportion.

The War To End All Wars, or World War One, and in colonial Africa the filthy French expatriates (less than European but imminently better than the eager to please native population) belatedly discover that they are at war with Germany, and so the filthy German expatriates (ditto) must be attended to and how. Almost a comedy were it not based in fact. One scene depicts the commotion when a European gentleman with airs meets a likewise endowed native chap. Perhaps the film's a comedy after all.

[font=Century Gothic]"Black and White in Color" takes place in 1915 at Fort Coulais in French Equatorial Africa.(Well, it is not really a fort, more like a ramshackle trading outpost in the middle of nowhere. The commander from the nearby German colony shops there.) It is so remote that the population is unaware that World War I has even begun until a package from the home country alerts them to the fact. And what's a bunch of French patriots supposed to do now that they are at war with Germany? A preemptive attack will do nicely...[/font] [font=Century Gothic][/font] [font=Century Gothic]"Black and White in Color" is an amusing satire about colonialism, patriotism and racism that continues to be relevant today. The movie is populated with broadly drawn characters. And the last line is nice, but a bit puzzling.[/font]