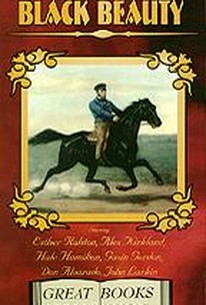 Before it became one of Hollywood's busiest B-picture mills, Monogram Pictures had a fondness for literary adaptations (The Moonstone, Jane Eyre etc.) Monogram's 1933 Black Beauty was, of course, based on the classic novel by Anna Sewell. Only a few of the many anecdotal adventures of the titular black horse are dramatized herein. Black Beauty is raised by a loving family, is abused by unloving owners, then returns to the loving family again. Silent movie star Esther Ralston is top-billed, but the true acting honors go to Black Beauty herself. The story would be remade by 20th Century-Fox in 1946, and for television several times over.

John Larkin
as Eph
View All

There are no critic reviews yet for Black Beauty. Keep checking Rotten Tomatoes for updates!

There are no featured reviews for Black Beauty at this time.