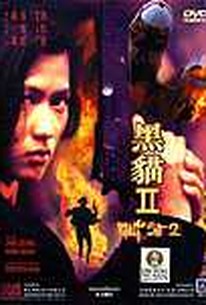 Director Stephen Shin Kei-yin follows up on his La Femme Nikita knock-off Black Cat with this sequel inspired in part by Terminator 2. In this go around, Erica (Jade Leung) is outfitted with a new computer chip in her brain that not only turns her into a remorseless killer cyborg, but also provides her superiors an "off" switch which can be flipped remotely. After being paired up with another killer named Robin (Robin Shou Wan-bo), she set out to hunt down and wipe out the nefarious Anti-Yeltsin Organization, a band of terrorists set on killing Russia's frequently drunken presidential strongman. Several of the terrorists have imbibed a special radioactive concoction to improve their fighting prowess. Fortunately, Erica's improved senses can quickly pick up on the exotic chemicals coursing through the baddies' bodies. Explosions, ski chases, and fight scenes in a steel mill ensue. This film proved to be such massive failure at the box office that it drove D&B Studios into bankruptcy. ~ Jonathan Crow, Rovi

There are no critic reviews yet for Black Cat 2. Keep checking Rotten Tomatoes for updates!

There are no featured reviews for Black Cat 2 at this time.