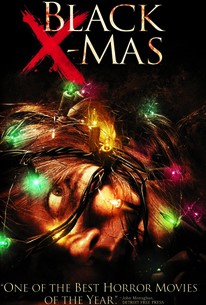 Critics Consensus: A gratuitous remake of the 1974 slasher, Black Christmas pumps out the gore and blood with zero creativity, humor, or visual flair.

Critics Consensus: A gratuitous remake of the 1974 slasher, Black Christmas pumps out the gore and blood with zero creativity, humor, or visual flair.

Critic Consensus: A gratuitous remake of the 1974 slasher, Black Christmas pumps out the gore and blood with zero creativity, humor, or visual flair.

Billy, a young boy, was abused by his mother as a child. His mother cheated on Billy's father, and eventually killed the man, while keeping Billy in the attic--for good, while she was with her lover and starting a "new" family. As Billy's mother fell pregnant with a daughter and treated her with the love he had never experienced, Billy came out of the attic after years and brutally murdered his mother and her lover. Cut to present day, a group of six sorority sisters consisting of Kelli, Dana, Lauren, Megan, Heather, Melissa and their house mother, who now live in Billy's childhood home, find themselves being harassed by threatening and intimidating mystery phone calls during Christmas Break. As one of the girls goes missing, they begin being murdered one by one by no other than Billy.

Kent Kubena
as Reindeer
View All

[I]t's just another witless trip to the slaughterhouse.

Glen Morgan's update of Bob Clark's 1974 slasher flick Black Christmas is an exemplar of how to screw up a modern horror film remake.

Black Christmas lacks the timing and visual wit to make its splattery EC Comics gags either genuinely scary or funny.

Like the fruitcake sitting on your counter it's a rather rote waste of time, and for the life of me I can't come up with anything else to say.

One for real horror-buffs only.

It just became a game of Let's See Which One Will Get Her Eyeballs Plucked Out Next, and not much more

The editing is horrendous. The tone is all over the place. The gore is over-the-top. It's a trashy mess. And yet, it's still dumb fun.

A rather useless remake. [Full review in Spanish]

A colossal mess, which is not at all as dispiriting as those remakes of classic horror which are just empty, shallow exercises in genre mechanics.

All setup and no payoff makes this a dull film.

Just another shitty remake in a world so full of many: unpleasant (but not in a good way), completely devoid of scares and with an awful, unimaginative plot in which no one is smart enough to call the police when things become seriously weird.

Unnecessary remake of the classic groundbreaking horror film of the same name, Black Christmas is a dull film that has everything you'd expect from a bad remake, bad acting, bad directing, predictable story and a poor cast. The original was a classic film that did not need to be remade. This film is not very entertaining, and relies on old ideas to create its horror. The end result is a film that simply doesn't work. As with nearly all remakes, Black Christmas is dull and is a disappointing film. There's nothing of interest that would make this film worth watching. The film lacks any depth to really make this one really stand out. The film navigates through constant mediocrity and overall ends up being an awful waste of time. Usually studios constantly remake horror classics such as Prom Night, The Hitcher Friday the 13th to name a few. Only a small handful were decent at best. But the Black Christmas remake suffers from a pointless story with bad acting that really tries too hard to entertain the viewer. Good horror films should be effortless in building the terror. However with this one, this is predictable and really bland with nothing new. As a slasher film, this remake doesn't do any that would make you expect the traditional good elements of what makes a slasher film so special. This remake is bland and predictable and is yet another remake that doesn't work because previously explored ideas that are just not intriguing. This should be avoided.

Classless remake of the brilliant original featuring a bunch of stuck-up, foul-mouthed sorority sisters who you really don't mind seeing get brutally eye-gouged by the maniacal Billy Lenz and his sister/daughter Agnes. It's fast-paced and fairly unpredictable as far as who lives and dies, but it lags a long way behind the original and other modern slashers too. Works well as an alternate Christmas movie for the miserable bastards that don't enjoy the fun and cheer of the holiday season. ;-)

One of the most wasted time movie experiences ever! The end was the worst way to end a movie I have ever seen! I recommend it to people who like laughing g at horror movies!